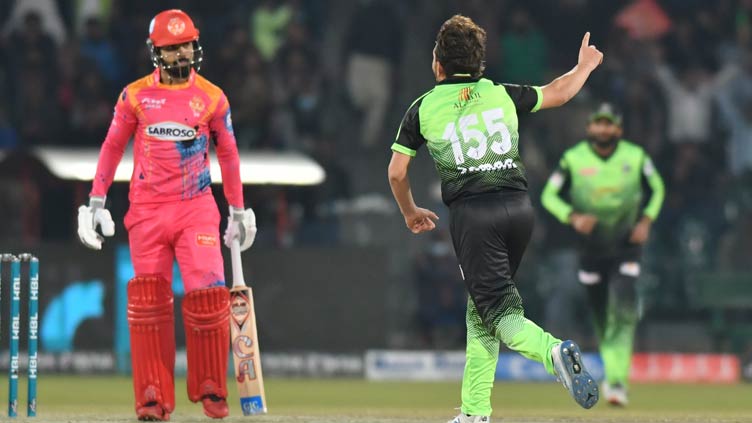 LAHORE (Dunya News) – David Wiese produced a sensational performance in the final overs of each of the two innings of the HBL PSL 7 Eliminator 2 against Islamabad United in front of a packed to capacity Lahore crowd at the Gaddafi Stadium on Friday night to guide his side to a six-run win and a place in the HBL PSL 7 final, to be played on Sunday, alongside defending champions Multan Sultans.

Weise turned the game on its head with the bat as he scored 26 runs off the final over of the Qalandars innings bowled by Waqas Maqsood. Waqas also conceded a wide, leaking 27 runs in the over as Qalandars went from a seemingly below-par 141 for seven to 168 for seven total in a matter of six balls. Weise remained undefeated with his explosive 28 off eight (one four, three sixes).

The Qalandars all-rounder then conceded just one run off the four balls of the final over he bowled as Mohammad Wasim Jnr was run out and Waqas brilliantly caught in the deep by Abdullah Shafique as United were bowled out for 162 with two balls to spare.

Qalandars won the toss and opted to bat. The home side was dealt a body blow in the first over when Liam Dawson sent back the tournament’s leading run-getter Fakhar Zaman (1). Dawson then accounted for Phil Salt (2) in his second over.

Qalandars fought back with a 73-run third-wicket partnership between Abdullah and Kamran Ghulam. Abdullah delighted the GSL with a series of eye-catching as well as power packed shots on his way to his maiden HBL PSL half-century. The right-hander top-scored for Qalandars with 52 off 28 (four fours, three sixes).

Kamran contributed 30 off 26 (three fours, one six). After the departure of Kamran and Abdullah, Qalandars stuttered in the middle overs. Samit Patel scored 21 (18) while Mohammad Hafeez struggled to get going with a run-a-ball 28. It was the final over that turned the tide in their favour.

Dawson with two for 24 (four overs) was the pick of the United bowlers.

United lost four early wickets and despite a quick start were in real trouble at 46 for four (5.4 overs) with Paul Stirling (13), Will Jacks (0), Shadab Khan (14) and Liam Dawson (12) all back in the dugout. Qalandars skipper Shaheen Shah Afridi took two of the first four wickets to fall in an inspired opening spell.

Qalandars clawed back in the game with United seemingly in command with Azam’s run out at 125 in the 14th over. After Hales was dismissed by Haris Rauf, Asif Ali kept United poised for a win with 25 off 22.

However, United kept losing wickets and when the last over started they needed eight runs but Wiese ensured that the Lahore supporters return home in a joyous mood.

For Qalandars Haris, Shaheen and Zaman took two wickets each. United lost three wickets to run outs in their innings.

Player of the match David Wiese said: “Unbelievable game and unbelievable team effort. The last over with the ball became easier for me when Haris got the wicket before the over began. I wanted to bowl dot balls and we got a run out also in the middle that made things easy. It has been amazing to play in front of such a wonderful crowd that has come out to support us all the way, it has been absolutely incredible.”