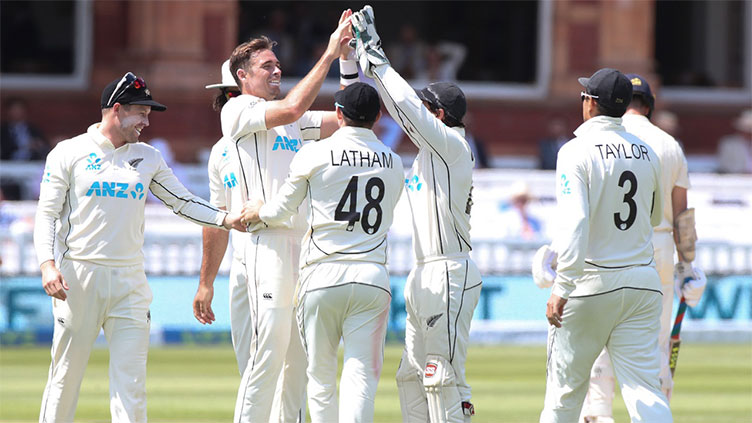 Zealand claimed an innings and 276 runs victory over South Africa in the first Test on Saturday.

CHRISTCHURCH (AFP) - Tim Southee took five wickets as New Zealand claimed a rare victory over South Africa on Saturday, wrapping up the first Test by an innings and 276 runs early on day three in Christchurch.

It is only the fifth time in 46 Tests since 1932 that New Zealand have beaten South Africa with their last victory coming in 2004.

South Africa, who were 387 behind after their first innings, resumed the day at 34 for three and showed little appetite to chase down the total. The Proteas lost their final seven wickets in the morning session.

Winning the toss and putting South Africa into bat was critical for New Zealand s success as the tourists crumbled in their first innings for 95 on a green wicket with Matt Henry bagging seven for 23.

A century by Henry Nicholls and a string of 50-plus partnerships saw New Zealand amass 482 in reply and the writing was on the wall for South Africa.

The tourists lost three wickets for only four runs at the start of their second innings and as the Test extended into a third day, only the diminutive Temba Bavuma and Kyle Verreynne offered any real resistance.

The 1.62-metre (5 ft 4 in) Bavuma, 22 overnight, scored 41 and shared in a 41-run stand with Verreynne before he was trapped leg before wicket by Neil Wagner.

Verreynne fell in the following over for 30, caught in slips off Southee who then quickly snagged the wicket of Kagiso Rabada for zero.

The day started badly for South Africa with Bavuma s overnight partner, Rassie van der Dussen, out on the second ball when Henry got the ball to nip back, finding a gap between bat and pad.

Zubayr Hamza, who top-scored with 25 when South Africa made a paltry 95 in their first innings, only managed six off 32 deliveries before he edged Kyle Jamieson to Daryl Mitchell at first slip.

The remaining batsmen -- Marco Jansen, Glenton Stuurman and Duanne Olivier -- contributed 21 between them.

Southee finished with five for 35 while man-of-the-match Henry and Wagner took two wickets each.