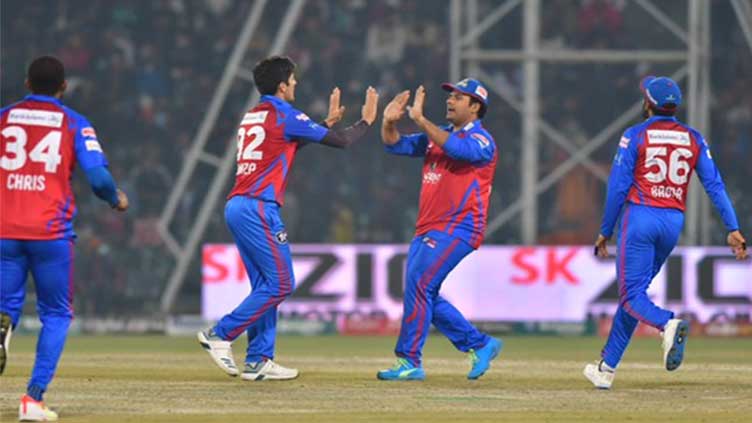 Kings who had lost all eight of their season matches before tonight had Hamza and the rest of the bowlers to thank for salvaging a victory for the franchise (2020 winners) at long last despite a below-par first innings score of 149.

In their 150-run chase, Qalandars never quite recovered from the early loss of the prolific Fakhar Zaman (1) – tournament’s highest run-getter and kept losing wickets at regular intervals as the Kings bowlers squeezed the scoring rate.

Mohammad Hafeez (33 off 24, four fours) looked comfortable at the crease but departed to a run-out which pegged back Qalandars. David Weise (31 off 23, two fours, one six) and Harry Brook (26) revived the Qalandars chase with a 55-run sixth-wicket partnership.

Qalandars needed 31 off the last two overs, Hamza who had earlier dismissed both openers, bowled a sensational penultimate over in which he accounted for both Weise and Brook and conceded only a six to Weise to help Kings strengthen their grip.

Chris Jordan removed Rashid Khan and Qalandars skipper Shaheen Shah Afridi was run out as the home side finished at 127 for nine in their 20 overs.

Despite the loss, Qalandars remain second on the six-team points table with 10 points from eight games (five wins, three defeats). They still have a real chance of finishing behind Sultans at the number two spot which will provide them the cushion of an extra play-offs match.

Kings will play the Quetta Gladiators in their tenth and last match on Sunday.

Earlier, Kings were rocked early in their innings after opting to bat as Joe Clarke who swapped his batting number with Sharjeel Khan fell for four. Regular opener Sharjeel (2) who came to bat at number three was dismissed by Shaheen to leave Kings 24 for two in three overs.

Babar Azam added 34 for the third-wicket with Qasim Akram, Qasim was bowled by Rashid for 26 while the wily Qalandars leg-spinner also accounted for Babar (39 off 32 balls, five fours).

Rashid tore through the Kings middle-order with a sensational spell of 4-0-17-4. The Afghan finished his HBL PSL 7 stint with 11 wickets in eight games, Rashid who will be on national duty will be replaced by Australian leg-spinner Fawad Ahmed in the Qalandars squad.

After Rashid’s heroics with the ball, pacer Zaman Khan polished off the Kings tail finishing with four wickets for 16 in 3.5 overs – Zaman’s best return in T20s. Lewis Gregory contributed 27 off 16 (five fours) to take Kings to their eventual 149 all out total in 19.5 overs.