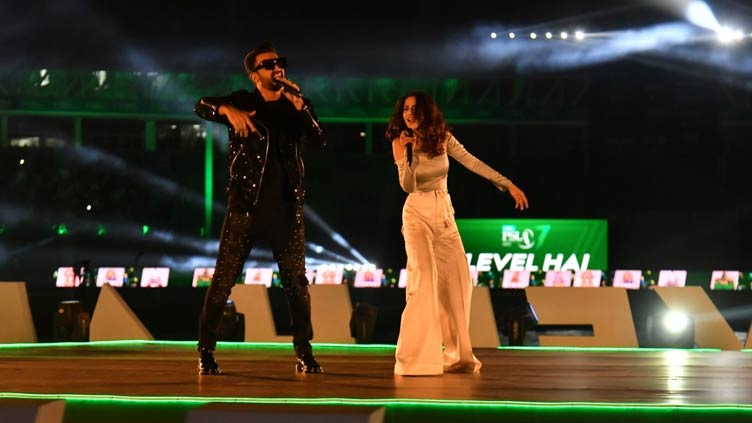 KARACHI (Dunya News) – Pakistan s biggest T20 tournament, the Pakistan Super League kicked off in Karachi on Thursday with a star studded opening ceremony ahead of the opening match between Karachi Kings and Multan Sultans.

Renowned singers enthralled the audiences with their tremendous performance during the ceremony. To top off all the celebrations, the PCB put on a fireworks display to mark the start of cricket festivities.

The opening match is being played between Karachi Kings and Multan Sultans.

Babar Azam: “I am very excited to be leading Karachi Kings this season. This is the first instance that I will be captaining a side in the PSL and I am looking forward to it.

“The first match of the tournament always has a lot of eyeballs and Multan Sultans can prove to be a tough opposition. I am sure the fans will get to see a thrilling contest.

“Peter Moores is a seasoned coach and I have had fruitful discussions with him. Karachi Kings will display good, competitive cricket this season.”

Mohammad Rizwan: “We have all the potential to defend our PSL title and we will be taking the field tomorrow with that mind set. This season will present us new challenges and we will have to plan accordingly.

“Babar Azam is a wonderful batter and captain, and his leadership will certainly have a good impact on Karachi Kings. I am hopeful that the PSL 7 will kick off with a great contest between the two sides.”

As per the National Command and Operation Centre (NCOC) directive, the seating capacity has been reduced to 25 per cent for all matches in Karachi, while a decision on the number of spectators in Lahore to be taken in due course. The health and safety protocols for this edition is available here

Lahore Qalandars, captained by Shaheen Shah Afridi, who has had stratospheric rise in international cricket since his debut in 2018, will hope the change in leadership leads to a change in their fortunes and they secure the glittering trophy.

Islamabad United are led by Shadab Khan. Sarfaraz Ahmed, who is the only player to lead his side in all the editions, will continue to command his Gladiators from Quetta, while Peshawar Zalmi will be led by Wahab Riaz.

The PSL has established itself as one of the top T20 leagues around the world and it has featured most sought-after cricketers from around the world. The competitiveness of this league and the quality of action has served up and coming Pakistan cricketers opportunities to learn, enhance their skills and learn nitty-gritties of the game.

National Stadium will host the first 15 matches till 7 February, before the action moves to Lahore, where Gaddafi Stadium, the home of Pakistan cricket, will stage the last 19 games from 10-27 February.

The competitive nature of the league has seen five of the six sides getting crowned champions since the league’s inception in 2016 with Islamabad United, the inaugural champions, being the only team to bag the title twice.

Peshawar Zalmi won the title in 2017 when they beat Quetta Gladiators in the final in Lahore in what was the first PSL match on Pakistan soil. Islamabad United became the champions for the second time with a win over Peshawar Zalmi at Karachi in 2018. Quetta Gladiators were third time lucky in 2019. Karachi Kings made history in 2020 as they beat their arch-rivals Lahore Qalandars at home.

The PCB has also adopted the ICC’s recent playing conditions. If a side are not in a position to field their last over of the innings on scheduled time, one fewer fielder will be permitted outside of the 30-yard circle for the remaining overs of the innings. There will be reserve day for the final and in case a result is not achieved, then the side topping the group stage will be declared champions. Amendments in playing conditions are available here.

To ensure the continuation of action in these unprecedented covid times, the PCB has allowed a side to field a playing XI based on all local players in case they are unable to field foreign players and the matches will go ahead if a side has at least 13 players available. The PCB has also created a pool of reserve players.