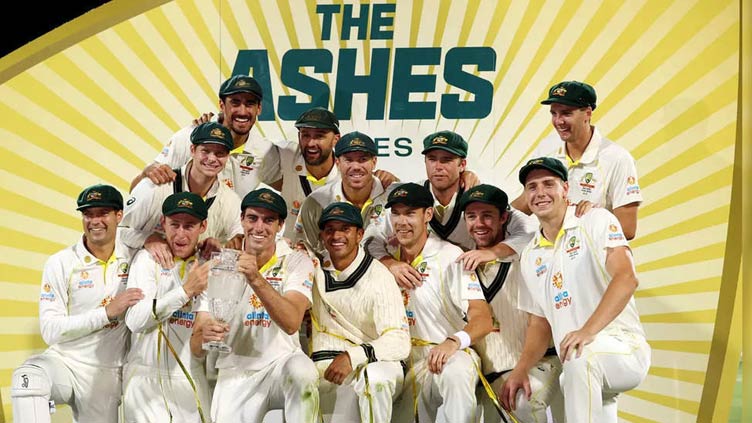 (Reuters) - Pat Cummins  leadership qualities were on full display even after his side sealed a 4-0 Ashes series win on Sunday as he ensured Usman Khawaja, the first Muslim cricketer to play for Australia, was not showered by champagne amid the celebrations.

As his euphoric team mates started popping champagne bottles on the stage at Hobart s Bellerive Oval, Khawaja stepped aside to avoid being sprayed with alcohol in keeping with his religious beliefs.

Cummins quickly noticed and asked his team mates to put aside the bottles and gestured for Khawaja to rejoin them on the dais.

Khawaja, who played the last two matches of the five-test series, returned to the stage and kneeled beside Cummins as the victorious side let out a roar posing for the cameras.

"We ve got a really diverse bunch of people and you want to celebrate that, you want to make sure everyone feels comfortable being themselves. That was just one moment," Cummins told reporters on Monday.

"The boys are fantastic in that space. They always look after each other. It’s a really tight-knit group.

"I think one of the reasons is there is a lot of respect and love for each other. We had to make sure our team mate was in the photo with us."

Playing his first test in 2-1/2 years, Khawaja smashed a hundred in each innings of the fourth match in Sydney batting in the middle order.

Opening the innings in Hobart, the left-hander scored six and 11 but still finished as the fifth highest scorer in the five-match series.

The left-hander took to Twitter to thank Cummins for his gesture.

"If this video doesn t show you that the boys have my back, I don t know what will," wrote Khawaja.

"They stopped their normal champagne celebrations so I could rejoin. Inclusivity in the game and our values as a sport are so important. I feel like we are trending in the right direction."

"Good leader always looks after the team as a whole and respects everyone equally and @patcummins30 has shown to be that leader," former Pakistan fast bowler Umar Gul said on Twitter.

The Islamabad-born player was part of a Cricket Australia working group aimed at increasing diversity in the game.