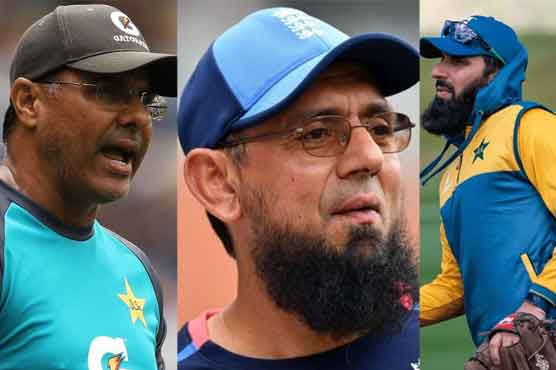 Saqlain Mushtaq said the resignation of Misbah and Waqar was their personal decision.

Pakistan national cricket team head coach Misbah-ul-Haq and bowling coach Waqar Younis had resigned from their positions before former Test cricketer Ramiz Raja took over as chairman of the PCB.

Following the resignations of the national team’s head coach and bowling coach, the PCB has temporarily appointed former Test cricketer Saqlain Mushtaq and former all-rounder Abdul Razzaq to the posts.

Commenting on the resignations, he said we shouldn t talk like this.

Mushtaq said that the words of “running away” were not appropriate for both the former captains and coaches, adding that the resignation of Misbah and Waqar was their personal decision.

The interim coach of Pakistan cricket team, Saqlain Mushtaq has said the national side’s preparations for the New Zealand series remain on track and the side is fully focused to make the most of the tourists’ historic visit of the country ahead of the T20 World Cup.

“I have been working with these players and the coaches as the head of international player development at the national high performance centre which makes me aware of the direction this team has been taking”, he said.

“The focus remains on playing aggressive cricket with positive intent in accordance with the modern-day standards. This will form the core of our strategy for what will be an exciting and challenging series against New Zealand.”

Saqlain, the former off-spinner, along with former all-rounder Abdul Razzaq, was asked to step up to the national team’s coaching set up on early Monday afternoon after Misbah-ul-Haq and Waqar Younis stepped down from the head coach and bowling coach responsibilities.

Expressing his delight at being offered the role, Saqlain, who was part of the England support staff when Eoin Morgan lifted the 50-over World Cup at the iconic Lord’s in 2019, said: “It gives one a kick when he is asked to serve the national team.

These players have potential and ability to surmount the upcoming challenges and I am eagerly looking forward to sharing the experience, I have gathered around the world, with them.”

He also said the presence of Razzaq will be beneficial for the fast bowlers and middle-order batsmen, recalling how he was instrumental in helping Pakistan lift their maiden T20 World Cup in 2009 with the ball and his ability to make the most of the death overs by hitting the bowlers all over the park.

Pakistan announced a 15-strong squad for the T20 World Cup, which begins for them on 24 October with the Super-12 fixture against India, on Monday. They have seven T20Is lined-up to fine-tune their combinations ahead of the tournament.

Replying to a question whether the change in coaching staff will have any effect on Pakistan’s preparations, Saqlain said: “These 15 players have proved themselves to be match winners in international cricket, in the Pakistan Super League and various T20 leagues around the world. I am confident in their abilities and that they will live up to expectations.

“Days before the 1999 World Cup, our then head coach, Javed Miandad, had also resigned from his position, but that did not hamper our preparations, in fact, we went on to play the final after a brilliant campaign. A cricketer is a fighter by nature and when he takes the field; his sole focus is on the game and executing the plans.”

Pakistan will host New Zealand after 18 years on their home soil for three-match One-Day International series, which serve as qualification for the 2023 50-over World Cup, at Rawalpindi and five T20 Internationals at Lahore.

They will then host England for two T20Is before the two teams depart for the UAE to take part in the T20 World Cup.