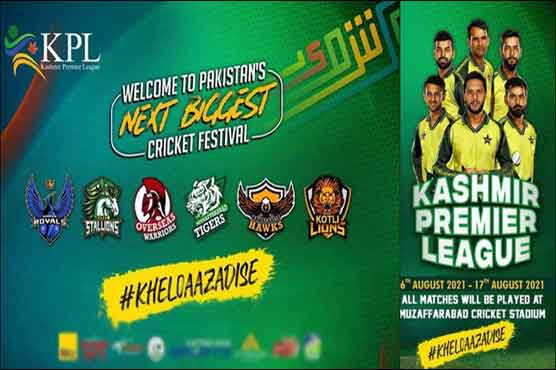 MUZAFFARABAD (Dunya News) - The schedule for inaugural edition of Kashmir Premier League 2021 has been announced.

Organized by the Pakistan Cricket Board, the T20 series will take place in Muzaffarabad Cricket Stadium in Azad Kashmir.

Six teams will fight for the trophy in the league, out of which one is from the Indian-occupied Kashmir. The teams, Rawalakot Hawks, Kotli Lions, Mirpur Royals, Muzaffarabad Tigers, Overseas Warriors, and Bagh Stallions, will play in a double round-robin format with each team facing the other twice.

The top four teams on the points table will make it to the KPL Cup Final.

Winner of Qualifier 1 vs Winner of Eliminator 2