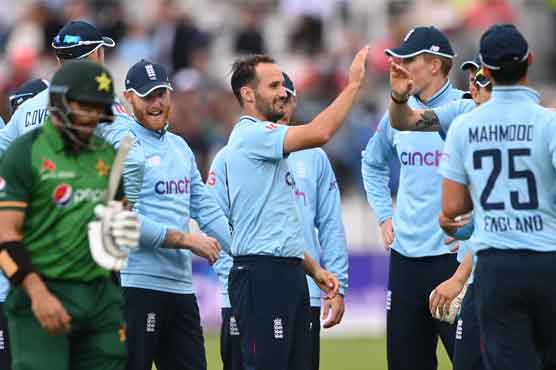 The toss was delayed due to rain and the match was reduced to 47 overs per side.

LONDON (Dunya News) – Heroic performances from bowlers enabled English to whitewash Pakistan 2-0 in the ODI series on Saturday, beating the visitors by 52 runs at Lords Cricket Ground on Saturday.

Philip Salt and James Vince were the star performer with the bat while Lewis Gregory picked three wickets with the ball.

Chasing 248, Pakistan lost Imam ul Haq in the second over of the innings. Babar Azam and Mohammad Rizwan were sent back in the dressing room by Saqib Mahmood within the first 10 overs. Craig Overton dismissed opening batsman Fakhar Zaman on 10 in the 14th over of the innings.

Saud Shakeel was the lone worrier for the visitors as he scored 56 runs of 77 balls but he did not receive ideal support from the other end. Pakistan kept losing wickets at regular intervals and in the end, fell short by 52 runs.

Earlier, Pakistan pacer Hasan Ali picked a five-wicket haul to help his side restrict England to 247/10 after visitors won the toss and invited the hosts to bat first. Ali’s 5-51 is the best figures by a Pakistan bowler against England in ODIs. With this five-wicket haul his name will be on the Lord’s honours board.

The toss was delayed due to rain and the match was reduced to 47 overs per side. England won the first game by nine wickets to take 1-0 lead in the series.

After losing two quick wickets Philip Salt and James Vince build a solid century partnership for the host. Both the batters scored fifties to take team’s total past 100. Saud Shakeel was brought into the attack to break the dangerous partnership. Shakeel dismissed Salt in the 18th over of 60 while Vince fell against Shadab Khan in the 21st over.

After the wicket of Vince Pakistan bounced back and kept on taking wickets after regular interval. Ben Stokes was sent back on 22 while wicket-keeper batsman John Simpson on 17. Lewis Gregory and Brydon Carse gave the finishing touch to the England’s innings.

England, the reigning 50-over world champions, had to select a completely new squad days before the start of this three-match series after a Covid-19 outbreak among their original party for the three-match series.

Yet a totally changed XI, captained by the fit-again Ben Stokes and featuring five debutants, thrashed Pakistan by nine wickets in the first ODI at Cardiff. Saturday’s match, at the home of cricket, is set to take place in front of a capacity crowd -- the first in English cricket since the coronavirus pandemic. It was the first ODI at Lord’s since England won the 2019 men s World Cup final with a thrilling Super Over victory against New Zealand.

We lose the toss and will bat