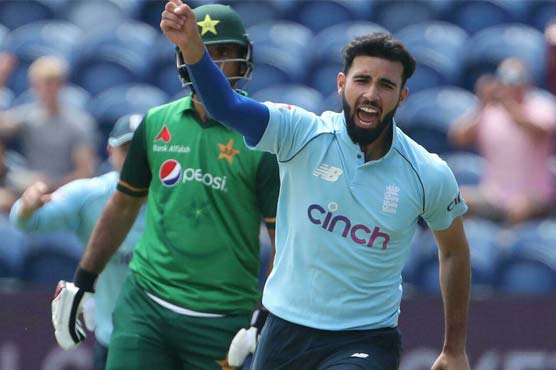 "I started the morning in Manchester and ended up in Cardiff."

CARDIFF, United Kingdom (AFP) - Saqib Mahmood reflected on an “out of the blue” England recall after a whirlwind 48 hours for the Lancashire quick ended with him named player of the match following an emphatic victory over Pakistan in the first one-day international in Cardiff on Thursday.

Mahmood had not played international cricket since September last year but, after a coronavirus outbreak forced England into hastily naming an entirely new squad for the three-match series with Pakistan, he responded with an ODI best 4-42 in a commanding nine-wicket win.

The 24-year-old enjoyed a fairytale start, removing Imam-ul-Haq lbw with the first ball of the game and, two deliveries later, dismissing Pakistan captain and star batsman Babar Azam for another duck.

Pakistan never recovered and were bowled out for just 141 with more than 14 overs to spare in their innings.

England’s ‘C team’ then cruised to victory on the back of unbeaten fifties from Dawid Malan and Zak Crawley -- one of five players in the 50-over world champions’ makeshift team making an ODI debut.

“I got the call on Tuesday, it was completely out of the blue,” Mahmood told reporters. “I woke up with a missed call off Spoons (England head coach Chris Silverwood) and a message saying, ‘text me when you see this’.

“I started the morning in Manchester and ended up in Cardiff.

“I guess the fact it all happened so quickly and there was less time to train was better than obsessing over your skills a little bit.”

Stand-in captain Ben Stokes, himself rushed back from a finger operation to lead the side, had urged one of the more unlikely England teams of recent times to believe in their own ability -- a point that resonated strongly with Mahmood.

“The message we’ve had was something Stokesy reiterated last night after training, that, yes, it is weird circumstances but at this given time everyone here deserves their place,” Mahmood said.

“Everyone here is the best player for the position they’re in. I always thrive in whatever team I play for when I’ve got that extra responsibility. Speaking to Stokesy, I knew he wanted me to take the new ball and when we were out there, he brought me on when we needed wickets. I’m just glad I was able to back it up and make the most of that responsibility.”

Although the most experienced member of England’s team, World Cup-winner Stokes gave himself just the one over and didn’t bat.

But the star all-rounder warned: “Something like today is a massive boost, but we do need to keep in mind that we weren’t put under any pressure and I’ve got no doubt that we will at some point.”

Pakistan came into this match having had to make do with a rain-marred intra-squad game, rather than proper tour fixtures.

Azam, speaking ahead of Saturday’s second ODI at Lord’s, said: “We lost early wickets and that’s why we didn’t go to a big total but credit to the England bowlers.

“We are looking forward to Lord’s and we’ll try our level best.”