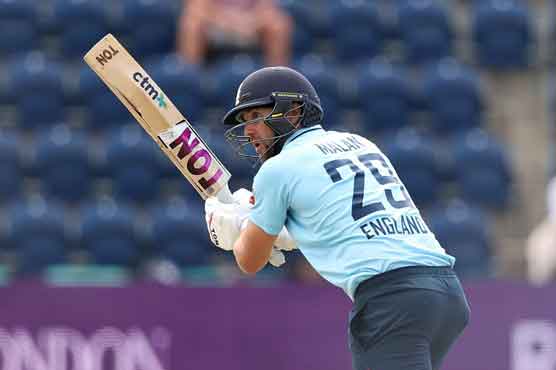 Target set by Pakistan was below par and that it should be an easy chase for Three Lions.

CARDIFF (Dunya News) – England beat Pakistan by nine wickets in the first ODI of the three-match series at the Sophia Gardens, Cardiff on Thursday.

England were chasing 142 and reach the target with nine wickets in hand. Dawid Malan and Zak Crawley scored fifties while Saqib Mahmood picked a four-wicket haul.

Malan and Philip Salt started England’s chase after finishing Pakistan’s innings on 141. Even though it was a very inexperienced batting line-up for the host, the target set by Pakistan was below par and that it was an easy chase for Three Lions.

Player of the match Mahmood took an ODI best 4-42 as Pakistan were skittled out for just 141 with more than 14 overs left to bat.

England were fielding a completely changed XI from their previous ODI -- the first time this had happened to any side in the 50-year history of the format -- after a Covid-19 outbreak within their existing squad during a recent 2-0 series win at home to Sri Lanka required all 16 players originally selected to play against Pakistan to self-isolate.

In addition, injuries to the likes of fast bowlers Jofra Archer and Olly Stone and wicketkeeper-batsman Jos Buttler meant they were effectively without two first-choice XIs.

Yet their  C team  dominated from the moment Mahmood took a wicket with the first ball of the match -- and then dismissed Pakistan captain Babar Azam, the world s top-ranked ODI batsman, for a duck with the third ball.

Opener Imam-ul-Haq was the first to go, when he was bowled by Saqib Mahmood in the first over without scoring a run. Mahmood struck again in the first over and Babar Azam (0) was caught by Crawley, while Mohammad Rizwan was removed by Lewis Gregory in the fourth over of the innings.

When you claim the prized wicket of the No.1 ODI batsman #ENGvPAK pic.twitter.com/fklNNIbGJy

Another wicket for England

Saud Shakeel was dismissed by Mahmood to pick his third wicket. Sohaib Maqsood and opening batsman Fakhar Zaman build a partnership to rescue the visitors. But Maqsood was unfortunate to get the run-out courtesy of a brilliant fielding effort by James Vince. Fakhar Zaman fell short of his fifty by three runs as he was sent back by Matt Parkinson on 47 in the 22nd over.

Earlier, England have won the toss and opted to field first against Pakistan.

England will miss all of their key players in this series. Ben Stokes will lead the side, whereas James Vince and Dawid Malan are other experienced batsmen. Phil Salt will take the keeping duties, whereas Jacks is also a talented player. Ball and Mahmood will lead the pace attack, whereas Briggs and Parkinson are their main spinners.

On the other hand, Pakistan would want to continue their good rhythm in this series after the South African tour. Fakhar Zaman and Babar Azam will again be the key batsmen, whereas Rizwan has also been brilliant this year.

Shadab Khan returns as an all-rounder, whereas Hasan Ali, Shaheen Afridi, and Haris Rauf will lead the pace bowling attack.

Pakistan will also welcome the return of Sohaib Maqsood, the middle-order batsman, who has been in smashing form across formats and was adjudged the Player of the Tournament in the recently concluded Pakistan Super League.

We win the toss and bowl.