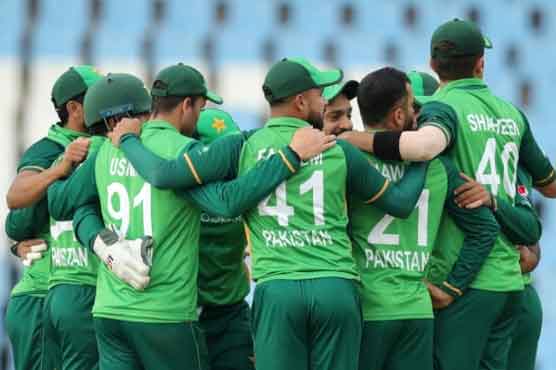 In the forthcoming three-match series, the winning team will earn 10 points for each win.

CARDIFF (Dunya News) – Babar Azam-led Pakistan men’s cricket team can replace England at the top of the ICC Men’s Cricket World Cup Super League by winning the three-match ODI series starting from tomorrow 8 July at Sophia Gardens Cardiff. The second ODI will be played on 10 July at Lord’s while third and final ODI of the series will be played on 13 July at Edgbaston.

The three-match series is a part of ICC Men’s Cricket World Cup Super League where England is leading with 65 points from 12 matches, England have won six matches and lost five while one match was abandoned due to rain. Bangladesh are on second position with five wins and four losses from nine matches has and have 50 points. Pakistan, who has won four matches (two each against Zimbabwe and South Africa) and lost two from six matches are on third position with 40 points.

In the forthcoming three-match series, the winning team will earn 10 points for each win.

If Pakistan win all three matches they will gain 30 points and will rise to the top position with 70 points at the end of the series. Meanwhile, if England win any of three-match series, they will further consolidate their position at the top spot.

Pakistan will also be aiming to improve their record of playing against England at their own backyard.

Since their inaugural ODI series in England in 1974, Pakistan have lost nine out of the 11 series with their only series win coming in the 1974 series. England on the other hand have won nine series, one series ended in a draw.

Babar, who is the number one ranked batsman in the ICC ODI rankings will be eager to maintain his top position. Babar is third on the run scorers list in the ICC Super League matches.

The right-handed batter has scored 449 runs at 89.80 in the six ICC Super League matches with the help of two centuries and as many half-centuries at a strike rate of 102.98.

Pakistan players to watch out for:

Besides Babar, Fakhar Zaman has played four ICC Super League matches. The left-hander has scored 304 runs at 76 with two hundreds to his name. He enjoys a strike rate of 111.35 and has hit 28 fours and 13 sixes. Fakhar will be eyeing to score big in the three-match series and playing a pivotal role for the Pakistan team.

Fakhar’s opening partner Imam-ul-Haq is another player who enjoys playing in England. In 12 ODIs in England, Imam has scored 539 at 53.90 with two centuries and one half-centuries. His career best 151 off 131 was also scored against England at County Ground in Bristol in 2019. The left-handed batsman has featured in six matches of the ICC Super League scoring 243 runs at 40.50. He has a strike rate of 80.46 with three half-centuries to his name. Imam also holds the record for youngest Pakistani to score a World Cup hundred – 100 off 100 against Bangladesh at Lord’s in 2019.

Mohammad Rizwan, wicketkeeper-batsman who recently helped his side Multan Sultans to their maiden HBL Pakistan Super League title will be looking to transform his form in the ODI cricket.

Since 1 May 2020, the wicketkeeper-batsman has featured in 33 international matches across all formats, scoring a staggering 1320 runs at 50.76, with two hundreds and 11 half-centuries.

Rizwan’s run-tally in the ongoing year is only 12 runs behind his captain Babar who has scored 1332 runs at 45.93 from 29 international matches.

Shaheen Shah Afridi will spearhead the bowling department, the left-arm pacer has 11 wickets to his name from six ICC Super League matches. His best figures of five for 49 came against Zimbabwe at Pindi Cricket Stadium in Rawalpindi last year which helped his side to a 26-run win.

The fast bowler like Imam enjoys playing in England. He has his career best figures of six for 35 against Bangladesh at Lord’s in ICC Cricket World Cup 2019.

Hasan Ali is another fast bowler the tourists will be relying on to make an impact in the series. The right-arm pacer has made a remarkable comeback in the national team.

Hasan has featured in 11 international matches this year where he has taken 40 wickets with four five wickets in an innings and one ten-wicket haul in a match. He is also the top wicket-taker in this year with India off-spinner Ravichandran Ashwin on second spot with 38 wickets.