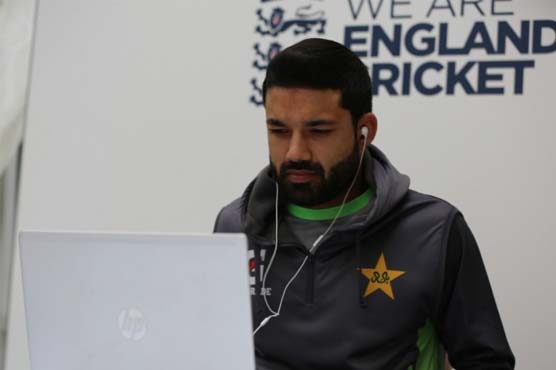 "Babar is an exceptional player."

DERBY (Dunya News) – Pakistani cricketer Mohammad Rizwan has expressed his excitement to play his role in a limited over series against England and win the matches for Pakistan.

The national team is currently touring England for a three-match ODI series and as many matches T20I series.

While talking to media via videoconference call today, Rizwan said, “We always love playing here in England. The conditions here are very supportive for an exciting and competitive series ahead.”

Rizwan who last toured to England in 2020 and scored two half-centuries in three-match Test series is looking forward to repeat the same performance in the limited-overs series as well. Rizwan has been a regular feature of the national team for one year and the team has won six consecutive series.

“Our morale is really high after the recent successful series and we are hoping for a good contest against the hosts in the upcoming series,” he said.

Under Rizwan’s captaincy, Multan Sultans have recently clinched their maiden PSL trophy beating Peshawar Zalmi by 47 runs in the final on 24 June. Rizwan’s own performance played an instrumental role in helping his side winning PSL 6 trophy.

The right-handed wicketkeeper-batsman has scored 500 at 69.25 from 11 matches which included seven half-centuries. He was declared best wicket-keeper of the tournament for 20 scalps behind the stumps.

Rizwan, who captained the national team in the two-Test match series against New Zealand in New Zealand in 2020-21 in the absence of Babar Azam, when asked about captaining the side in future, Rizwan responded, “I have never thought about captaining the team. At the moment, I am enjoying my batting, and trying to give my hundred per cent whenever and where I get an opportunity to help the team.”

When asked to comment on his opening partner (T20I) and captain Babar, he said, “Babar is an exceptional player. As a player we have to adapt to the conditions and play as circumstances demand.

“Everyone knows about Babar’s potential, skills and his experience and he is capitalising all that stuff pretty well,” he remarked.

On the inclusion of his Sultans team mate Sohaib Maqsood in the national team, Rizwan said, “Sohaib is a good player and he can play anywhere and he has already proved it with his battings skills. Our combination is good and we are looking to give better results in the series against England starting from 8 July.”