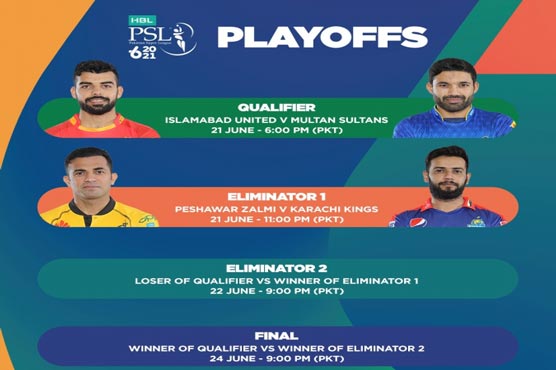 ABU DHABI (Dunya News) - An action-packed and topsy-turvy league matches stage of the HBL Pakistan Super League 6 ended with a last-over win for table-toppers Islamabad United against Multan Sultans last night. This was a virtual dress rehearsal for the Qualifier between the two teams, set to be played on Monday, 21 June, at the Sheikh Zayed Cricket Stadium in Abu Dhabi.

The first 14 matches in the six-team 30-match double-league format were played at Karachi’s National Stadium before a Covid-19 induced suspension on 4 March.

A monumental effort by the PCB, Emirates Cricket Board and Abu Dhabi Cricket ensured the resumption of the tournament in Abu Dhabi on 9 June.

Since the restart, 16 remaining matches of the league stage have been played at the Sheikh Zayed Cricket Stadium between 9 and 19 June with two-time champions United emerging at the top of the table with 16 points from 10 matches.

Sultans, who were languishing at the fifth spot with a mere two points at the end of the Karachi-leg, made an astonishing comeback to win four out of their five Abu Dhabi-leg games to end on the second spot with 10 points and a net run-rate of +1.05.

Zalmi (NRR +0.586) and defending champions Karachi Kings (NRR -0.115) also ended the league stage with 10 points each to ensure their qualification ahead of Lahore Qalandars, who despite finishing with 10 points, missed out on a play-off spot due to an inferior net run-rate of -0.589.

Quetta Gladiators had to endure a surprise dip in form as well as absence of international stars Andre Russell and Faf du Plessis due to concussions which saw them finish at the bottom of the table. The 2019 champions managed just four points from 10 matches (two wins, eight defeats).

LOOKING AHEAD TO THE PLAY-OFFS

Qualifier –Islamabad United vs Multan Sultans: United have been in a red-hot form since losing their first Abu Dhabi-leg match to Qalandars in a last-over thriller on 9 June. Shadab Khan-led side have since won five matches on the trot to finish with a staggering eight wins in 10 league-stage matches. United had won three out of their first four matches of the Karachi-leg.

The foreign opening duo of Usman Khawaja and Colin Munro have dazzled for United in the Abu Dhabi-leg. Usman, the Australian international batsman, posted the only century of the Abu Dhabi-leg, leading his side to victory in a record breaking, high scoring thriller against Zalmi last week.

Asif Ali and Iftikhar Ahmed have provided valuable support in the middle-order with the bat with match winning contributions.

Amongst the bowlers, Hasan Ali leads the pack for United with 12 wickets in eight games at 16.75. Emerging category pacer Mohammad Wasim Jr. has been most impressive in his debut HBL PSL season, collecting 11 wickets in nine matches.

Mohammad Rizwan-led Sultans have emerged from the disappointments of the fifth-position in Karachi to the highs of a second-place finish in Abu Dhabi. Rizwan has led the side from the front with a tally of 470 runs at 52.22 with the help of four half-centuries. Sohaib Maqsood has scored 304 runs in 10 games at 38 with a strike-rate of 154.31.

Sultans’ emerging category fast bowler Shahnawaz Dahani has been most impressive with his 20 wickets in nine matches taking him to the top of the wicket-takers list. His wickets have come at an incredible 13.65 average, he has picked-up two player-of-the-match awards.

Eliminator 1 –Peshawar Zalmi vs Karachi Kings: Wahab Riaz-led Peshawar Zalmi produced some thrilling cricket to ensure a play-off berth despite some hiccups on the way.

Seasoned campaigner Shoaib Malik has been their top scorer to date with 244 runs in 10 games at 30.50 and a strike-rate of 140.22. Malik made two fighting half-centuries in the Abu Dhabi-leg against Qalandars and United to ensure his team fought all the way in pursuit of steep targets while minimising the damage to their net run-rate.

Wahab has led the bowling charts for Zalmi with his spirited efforts with the new and the old ball resulting in 14 wickets in nine league matches at 21.85.

Defending champions Kings had to fight hard to resurrect their campaign after losing the first three matches of the Abu Dhabi-leg, which left them on the verge of elimination.

Imad Wasim-led side won a last-over thriller against Qalandars – their ninth match, before defeating Gladiators on Saturday evening to clinch the fourth-spot in the playoffs ahead of their arch-rivals Qalandars.

Emerging category pacer Arshad Iqbal is the leading wicket-taker for the Kings with eight wickets in as many matches at 29.