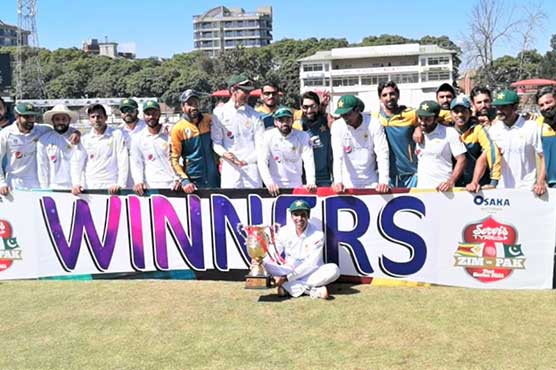 It was the fourth successive series win for Pakistan on a southern Africa tour.

HARARE (AP) — Pakistan quickly took the one wicket it needed Monday for another innings victory over struggling Zimbabwe in the second test and a 2-0 series sweep.

It took only five overs on Day 4 for Shaheen Shah Afridi to end it by having Luke Jongwe caught behind by wicketkeeper Mohammad Rizwan for 37.

Pakistan won by an innings and 147 runs at Harare Sports Club to go with the innings and 116-run win in the first test at the same venue.

Pakistan also claimed a slice of history with Afridi’s 5-52 making him the third Pakistan bowler in the test to take a five-wicket haul. He and Nauman Ali (5-86) took five each in the second innings after Hasan Ali’s five in the first.

Zimbabwe continued on 220-9 in its second innings, on the brink of defeat and still 158 runs short of making Pakistan bat again. The home team added only 11 more runs to be all out for 231.

Pakistan controlled the match from the start and posted 510-8 declared after batting first, with 215 not out from opener Abid Ali and 126 from Azhar Ali.

The bowlers then went to work and were also dominant, with Hasan Ali collecting 5-27 in 13 overs as Pakistan bowled Zimbabwe out for 132 in its first innings and made the home team follow on.

Zimbabwe was outclassed and only passed 200 once in its four innings in the series.

Pakistan also won ODI and Twenty20 series in South Africa and a T20 series in Zimbabwe in its tour of southern Africa.

Speaking at the post-match presentation, Pakistan captain Babar Azam lauded his players after they completed a successful southern Africa tour with a second straight innings victory over Zimbabwe on Monday -- then looked ahead to his team s planned tour of the West Indies in July.

It took Pakistan five overs to take the remaining Zimbabwe wicket to seal a win by an innings and 147 runs on the fourth day of the second Test at Harare Sports Club and take the series 2-0.

Shaheen Shah Afridi had Luke Jongwe caught behind for 37 to complete a five-wicket haul. He took five for 52. Zimbabwe, who resumed at 220 for nine, were all out for 231.

Babar said his players had shown character and he was particularly pleased with the performance of the batsmen, especially man-of-the-match Abid Ali, who scored 215 not out in Pakistan s only innings.

"The partnership between Abid and Azhar Ali was crucial," he said. Azhar scored 126 in a second-wicket stand of 236. "The confidence of our batsmen will be high and we have an important series in the West Indies coming up," said Babar.

Zimbabwe captain Brendan Taylor said he was disappointed with his team s batting in both Tests but praised the Pakistan bowlers.

"They re always at you. They re a world-class attack and they made it very difficult for us," he said.

Fast bowler Hasan Ali was named man of the series. He had match figures of nine for 89 in the first Test at the same venue and took a career-best five for 27 in the first innings of the second Test.

"I would like to have seen more positives," said Taylor. "To finish both games in three days or just after three days is off the mark.

"We ve got a lot of things to address, particularly with the batting, maybe the mental side of that. A little more discipline. The wicket played well enough to take it five days."

But Taylor said there had been some promising signs in a side depleted by injuries to four leading batsmen. "I can t fault the guys efforts. They are a young side, full of enthusiasm, wanting to learn and to get better day by day."

Pakistan won the first Test by an innings and 116 runs. It was Pakistan s fourth successive series win on a seven-week southern Africa tour. They beat South Africa 2-1 in one-day internationals and 3-1 in Twenty20 internationals before defeating Zimbabwe 2-1 in a T20 series.