Pakistan on verge of successive innings triumph over Zimbabwe 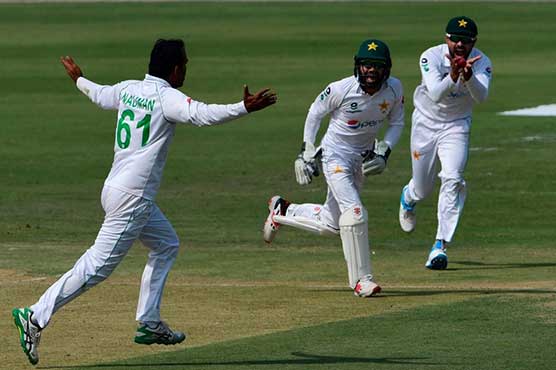 Pakistan on verge of successive innings triumph over Zimbabwe

HARARE (AFP) - Pakistan were thwarted by bad light on Sunday, one wicket short of a second successive innings win against Zimbabwe, but could afford to start contemplating a clean sweep of series wins on their southern Africa tour.

Despite a fighting innings by Regis Chakabva on the third day of the second and final Test at Harare Sports Club, Zimbabwe were 220 for nine in their follow-on innings at the close, 158 runs short of making Pakistan bat again.

"It would be a great win for us tomorrow as we will end both tours with wins in all series," said left-arm spinner Nauman Ali, who took five for 86 in the second innings.

Pakistan won two white-ball series in South Africa before winning a Twenty20 series in Zimbabwe ahead of the Test matches.

Chakabva scored 80 as Zimbabwe made their highest total of a series in which they have been outclassed.

The wicketkeeper-batsman followed up his top score of 33 in the first innings by making his team s only half-century in the two matches.

But his dismissal started a collapse in which six wickets fell for 35 runs.

"It s a very disappointing situation to find ourselves in, in both Test matches actually," said Chikabva.

"Pakistan have good bowlers. They re very skilful but it s disappointing that on a good batting track we didn t apply ourselves the way we should have."

Pakistan fast bowler Hasan Ali continued his mastery over Zimbabwe s batsmen, taking a career-best five for 27 as the host nation were bowled out for 132 in the first innings.

Hasan, man of the match after taking nine for 89 when Pakistan won the first Test by an innings and 116 runs at the same venue, went wicketless in the second innings but conceded only nine runs in ten overs.

Nauman and left-arm fast bowler Shaheen Shah Afridi, who took four for 45, were the wicket-takers in the second innings.

Nauman, who had to wait until he was 34 before making his Test debut against South Africa in January, claimed his second five-wicket haul in four Tests. His bowling performance followed a swashbuckling innings of 97 on Saturday.

"I never lost hope and kept performing at the domestic level," he said.

"My performance in Tests is all because of my hard work. I was a bit angry on missing a maiden century so I was determined to do well in bowling."

He shared an attacking third wicket partnership of 79 with captain Brendan Taylor, who raced to 49 off 31 balls before being caught by wicketkeeper Mohammad Rizwan down the leg side off Afridi.

Taylor spoke after the second day about the need for batsmen to spend a long time at the crease but both he and Chakabva went for their shots, especially against the Pakistan spin bowlers, as captain Babar Azam set attacking fields.

Chakabva fell when he edged an attempted big hit off Nauman to Babar at slip.

"I was trying to find a balance between playing a long innings and taking my opportunities when they came," he said.

The ninth wicket fell two overs before the scheduled finish but the last pair, Luke Jongwe and Blessing Muzaranbani, survived.

The umpires allowed an extra half hour s play in order to try to achieve a result but called it off for bad light four overs into the added time.