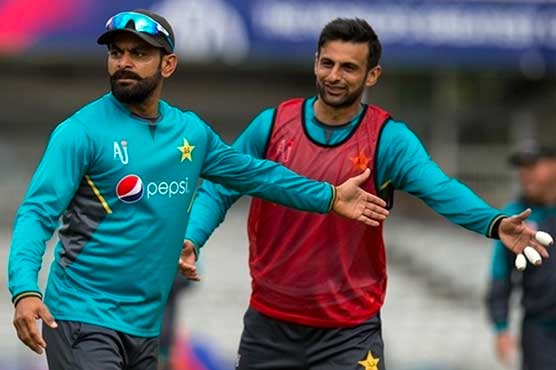 Shoaib said, "I hope he continues to perform like this for a long period of time."

LAHORE (Dunya News) – Pakistan all-rounder Shoaib Malik on Friday while expressing good wishes for teammate Muhammad Hafeez hoped that he become player of the match in his 100th T20I and Pakistan wins the match.

“I am very happy and proud as a Pakistani and I hope he continues to perform like this for a long period of time,” he said in a PCB podcast.

Sharing an insight to the Pakistan team celebrations after they became the first side from Asia to win two ODI series in South Africa, Haris Rauf said that the whole team worked hard to win the series.

Pakistan batting coach Younis Khan while discussing the progress made by the team said that there is still room for improvement, adding that Fakhar Zaman s return to cricket after illness was excellent.

It is pertinent to mention here that after a thrilling ODI series between South Africa and Pakistan, both teams are ready to battle out for the upcoming T20I leg, starting from Saturday (April 10).

The visitors will be high in confidence as they clinched the three-match ODI series 2-1. Captain Babar Azam and opener Fakhar Zaman were the leading run-scorers in the series. While Fakhar amassed 302 runs with two centuries, including the highest score of 193, Babar accumulated 228 runs with one hundred.

On the other hand, South Africa will be looking to do well in the four-match T20I leg. However, they are short of their regular players, who have been released from the squad to participate in Indian Premier League (IPL) 2021. Kagiso Rabada, Quinton de Kock, David Miller, Lungi Ngidi and Anrich Nortje have joined their respective franchises.