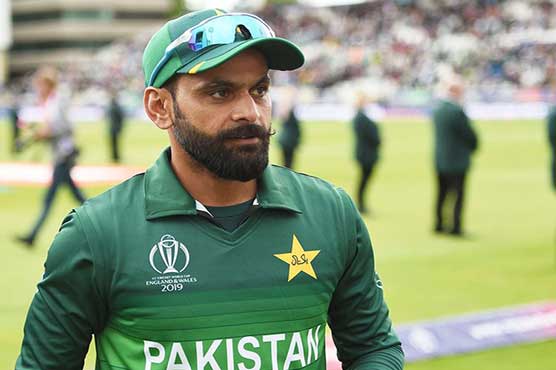 Hafeez will be aiming to join Shoaib in the list of players to have played in 100 or more T20Is.

LAHORE (Dunya News) – Veteran all rounder Mohammad Hafeez will become the second Pakistan player and sixth overall to feature in 100 T20Is when he takes the field against South Africa in first of the four men’s Twenty20 Internationals on Saturday at the Wanderers Stadium in Johannesburg.

Hafeez, 40, is one shy of reaching the three-figure mark and all set to join the exclusive club of Shoaib Malik (116), Rohit Sharma (111), Martin Guptill, Eoin Morgan and Ross Taylor (102) who have appeared in 100 or more T20Is since the inception of the shortest format of the game in February 2005.

Hafeez featured in Pakistan’s first-ever T20I in August 2006 in Bristol and scored 46 in Pakistan’s five wickets victory over England. Interestingly, Hafeez’s 50th appearance was also at the Wanderers Stadium against South Africa in November 2013 when he as captain took two for 25 and scored 13 not out as the hosts beat Pakistan by four runs in a rain-shortened match.

While Hafeez will be aiming to join Shoaib in the list of players to have played in 100 or more T20Is, he will also be looking to score, at least, 13 runs that will help him leapfrog Shoaib as Pakistan’s leading run-scorer in T20Is.

Hafeez has represented Pakistan in five of the six ICC T20 World Cups since 2007, but missed the 2009 campaign in England, which Pakistan won under Younis Khan at Lord’s.

While Hafeez will be looking for double celebrations on Saturday, Pakistan will be targeting to carry the momentum of the ODI series and make a winning start in the four-match series.

On the ICC T20I rankings, Pakistan is sitting in fourth place on 260 points while South Africa is sixth on 251 points. England is on top of the tree with 272 points, followed by India (270) and Australia (267).

If Pakistan win all four matches, they will earn four points and move to 264 points to reduce the gap to three points with Australia. However, if the series result in reversed, then both the side will swap places with South Africa rising to fourth on 259 points and Pakistan dropping to sixth on 254 points.

In the ICC T20I Player Rankings, Pakistan captain Babar Azam is the highest-ranked player on either side. The champion batsman is ranked third behind Dawid Malan (England) and Aaron Finch (Australia) but has a chance to narrow the gap with Australia opener whom he trails by 29 points.

Rassie van der Dussen is the next high-ranked batsman in seventh position, followed by Hafeez (46th), Mohammad Rizwan (47th) and Fakhar Zaman (50th), while Heinrich Klaasen, who will captain South Africa in the absence of Temba Bavuma is ranked 91st.

Babar Azam will be captaining Pakistan in his sixth series since taking over as T20I captain from Sarfaraz Ahmed in October 2019. His side lost 2-0 to Australia, beat Bangladesh 2-0, drew 1-1 with England, won 3-0 with Zimbabwe, and won 2-1 against South Africa.