Fakhar holds himself responsible for run-out in 2nd ODI 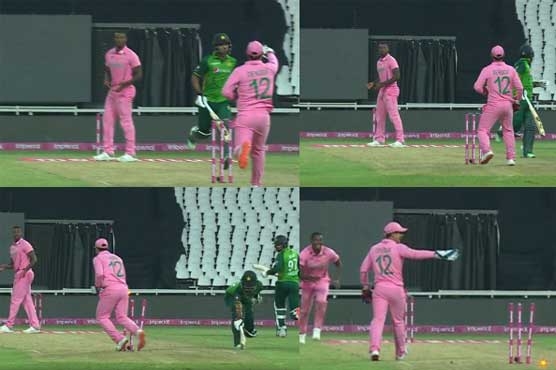 Fakhar holds himself responsible for run-out in 2nd ODI

LAHORE (Dunya News) – Pakistan s firebrand opener, Fakhar Zaman on Thursday talked about his controversial run-out during the second ODI and said that South African wicketkeeper Quinton de Kock was not resonsible for his run-out and it was his own fault.

Addressing a press conference through video link, he said that the victory against South Africa was the result of the team combination and the team management and captain supported him in difficult time.

The firebrand opener said that he was satisfied with his performance in difficult conditions, adding that he would not disappoint if given opportunity in T20.

Meanwhile, Fakhar Zaman played an ODI knock for the ages against South Africa in Johannesburg last week Sunday, where he scored 193 runs in 155 balls before being run out in the last over: breaking the record for the highest score in an ODI innings when batting second. His performance catapulted him up to 7 places to the 12th in the ICC Men’s ODI Player Rankings for batsmen.

In bowlers, South African Anrich Nortje started the series against Pakistan with figures of 4-51 and 3-63 to move to a career-best 73rd place with 427 points. His compatriot, Haris Rauf took five wickets in the first two ODIs to gain 71 places to 143rd with the ball.

In the T20I format of the game, Kiwi debutant Finn Allen smashed a 71 from 29 balls in the rain-affected third match against Bangladesh to move into the world’s top 100 of the ICC Men’s T20I Player Rankings for batsmen. His teammate, Tim Southee remains the top-ranked seamer in sixth place, up to a career-best 669 points after taking 3-15 in the final match against Bangladesh.

Gerhard Erasmus led Namibia to a 3-0 series victory over Uganda and his unbeaten 62 in the first match helped him up to 66th place, his country’s top-ranked batsman. His team-mate Craig Williams struck 81 in the final match which helped him gain 33 places to 147. Riazat Ali Shah totalled 56 runs in the series, and is Uganda’s highest ranked batsman in 135th place, with a career-best 269 points. Bernard Scholtz remains Namibia’s highest-ranked bowler in 51st place, after taking four wickets in the series in the T20I format with the ball.

In the ICC Men’s Test Player Rankings, Kraigg Brathwaite was the major mover with the bat up 21 places to 43rd. He is at his highest points tally since August 2019. Oshada Fernando’s second innings unbeaten 66 helped him gain 11 places to 61. Jason Holder held on to top place in the all-rounder rankings owing to his innings of 30 and 71 not out plus 2-39 against Sri Lanka.