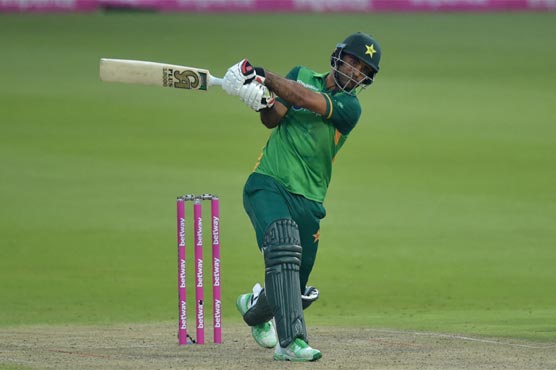 CENTURION (Dunya News) – After a brilliant knock of 193 runs in second one-day international (ODI) against South Africa, Pakistan’s Fakhar Zaman Wednesday smashed another century in the third and final match of the series.

Fakhar Zaman scored 101 runs off 104 balls after Temba Bavuma won the toss and put Pakistan into bat at the SuperSport Park, Centurion. His innings included three sixes and nine fours. He was dismissed by Maharaj. Pakistan were 206/2 in 36 overs.

Temba Bavuma said at the toss, “We looked at overhead conditions and we think in the morning their might be a bit of swing to exploit. Defending here on the Highveld is a challenge.”

Pakistan skipper Babar Azam said, “The wicket is very good. We are aiming for 300.We have left the previous match behind. Today’s match is very important. We have four changes. A lot of experience players come in.”

Legspinner Usman Qadir, son of the late Abdul Qadir, makes his ODI debut for Pakistan while Sarfraz Ahmed, Mohammad Nawaz and Hasan Ali have also been included in the playing XI.

The three-match series is level 1-1 as the Green Shirts had won the first game by three wickets while the Proteas emerged victorious in the thrilling second encounter by seventeen runs.