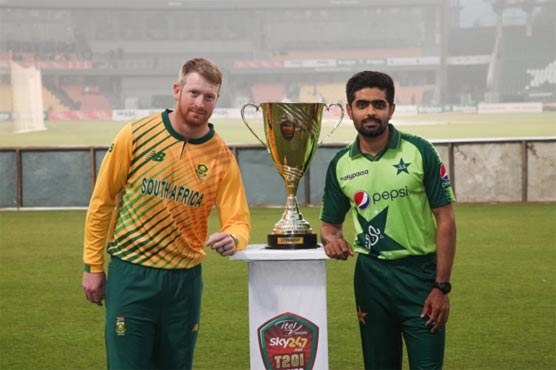 Pakistan are presently ranked fourth on the ICC T20I Rankings Table with 259 points.

LAHORE (Dunya News) – After gaining two places in the ICC Test Team Rankings, Babar Azam’s men will aim to collect the four available T20I ranking points when they go head to head with South Africa in the three-match series at the Gaddafi Stadium on Thursday.

Pakistan are presently ranked fourth on the ICC T20I Rankings Table with 259 points, nine points behind India (268), while South Africa are fifth on 252 points. If Pakistan sweep the series, they will rise to 263 points, five points behind India, while South Africa will join New Zealand on 247 points but will be ranked below New Zealand on sixth points when the points are calculated beyond the decimal point.

The two sides will feature in a T20I series on Pakistan soil for the first time. Pakistan’s previous two home T20I series were played in the United Arab Emirates in 2010 and 2013, which were won by South Africa by an identical 2-0 margin.

In the six T20I series to date, the only time Pakistan has won a series was in South Africa in March 2013 when they won the Centurion match by 95 runs after the Durban T20I was washed out.

The series is part of Pakistan’s preparation for this year’s ICC T20 World Cup 2021. In the lead up to the 16-tournament, Pakistan will feature in, at least, 17 T20Is, including home T20Is against South Africa, New Zealand and England, while their away T20I engagements will be against South Africa, Zimbabwe, England and the West Indies.

This has open doors for domestic cricket performers such as Aamer Yamin, Amad Butt, Danish Aziz, Hussain Talat, Zafar Gohar and Zahid Mahmood, as well as relatively new international stars in Asif Ali, Haider Ali, Iftikhar Ahmed, Khushdil Shah, Mohammad Nawaz and Usman Qadir to grab the opportunity and cement their places in the side.

The star attraction of the series will once again be Babar Azam, the second-ranked T20I batsman in the world. Babar averages just under 51 in 44 matches, while at the Gaddafi Stadium, he averages 46 with 322 runs in nine matches.

However, Babar is still looking for his maiden T20I century and will be hoping to get his first in this series. In the 11 T20Is as captain, Babar has captained his side to victory in six matches, while two were abandoned.

The South African side will be captained by Heinrich Klaasen, who has featured in 13 T20Is for his country.

However, David Miller remains the only player with some experience of Pakistan conditions after he represented the ICC World XI against Pakistan at the Gaddafi Stadium in 2017. On that tour, he scored 41 runs in three matches with a highest of 32 in the final match.

Squads (to be selected from)

ICC’s interim playing regulations, which will be applicable to the upcoming series, are:

Ban on applying saliva to the ball: Players will not be permitted to use saliva to shine the ball. If a player does apply saliva to the ball, the umpires will manage the situation with some leniency during an initial period of adjustment for the players, but subsequent instances will result in the team receiving a warning.

A team can be issued up to two warnings per innings but repeated use of saliva on the ball will result in a five-run penalty to the batting side. Whenever saliva is applied to the ball, the umpires will be instructed to clean the ball before play recommences.

Additional DRS reviews: The CEC has also confirmed an additional unsuccessful DRS review for each team in each innings of a match, keeping in mind that there may be less experienced umpires on duty at times. This will increase the number of unsuccessful appeals per innings for each team to two for the white-ball formats.

The ICC Cricket Operations team will support Match Referees when processing Code of Conduct breaches and a neutral Elite Panel match referee will conduct any hearing remotely via video link.