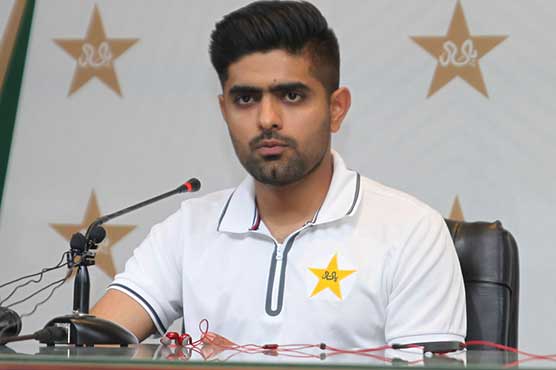 ISLAMABAD (Dunya News) – Pakistani Skipper Babar Azam has hinted to go on with the winning combination of the first Test in the second game against South Africa beginning Thursday at the Pindi Stadium, Rawalpindi, saying but the final call on the Playing XI would depend on the conditions on the day.

“We are also seeing the same thing, but the final verdict on the Playing XI will be finalized after seeing the pitch, weather and conditions. You never know what the conditions will be on day as it was also cloudy today,” he said in a virtual press conference on Wednesday.

Babar said the team prepared very well during the practice sessions and the players were high in morale after winning the first Test against South Africa.

“The way we played the first match we will try to perform the same in the second. We will not take South African team easy as we know they can bounce back,” he said.

The prolific batsman said he feels four seamers cannot be played in the second Test. “We will plan by keeping in mind the five day game and the combination best for the team will be played,” he said.

Babar said he would be missing the Rawalpindi crowd which gave him so much love and honour when he scored a 143 in the Test match against Bangladesh last year.

“When I was going to the wicket from the dressing room, the crowd cheered and backed me. You get a lot of confidence from it as it helps you performing better. Keep supporting and backing us. Unfortunately we cannot see you but you can,” he said.

He also lauded youngsters Abdullah Shafiq and Saud Shakeel saying they have been performing well. “We are also trying to give them confidence which is needed in international cricket,” he said.

Babar also praised Fawad Alam and Azhar Ali for building up a superb innings and partnership in the first Test against South Africa. “They have the knowledge of how to play in difficult situations. The youngsters should learn from them,” he said.

The Lahore-born cricketer credited himself for his performance and consistency in the game. “I want to credit my hard work and the sacrifices I made. I talked to players which helped me how to perform in difficult conditions. You get experience and confidence when you play consistently and perform.

I did not relax after performing, I used to sit and see how can I do better and what is lacking in my performance. Goals and mindset is very important,” he said.