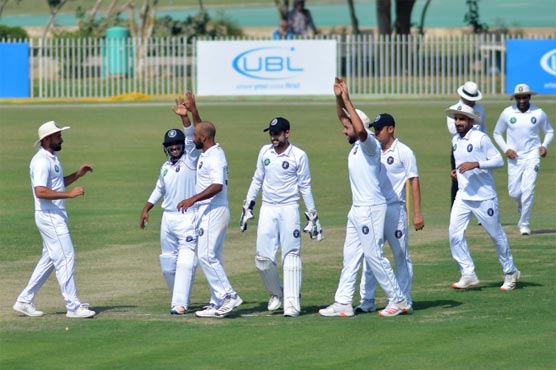 Khyber Pakhtunkhwa bowled out Central Punjab for a paltry 158.

KARACHI (Dunya News) – Khyber Pakhtunkhwa gathered all bonus points for bowling on offer as they bowled out Central Punjab for a paltry 158 in 66.2 overs on the opening day of the fourth round of the first-class Quaid-e-Azam Trophy at the UBL Sports Complex, pcb.com.pk said.

The defending champions dealt a blow on the first ball of the match as Ali Zaryab was trapped in front by Imran Khan Snr. The pacer added two more wickets to his tally and returned three for 29 from 13 overs, four of which were maidens.

Usman, who had elected to bat after winning the toss, was the only batsman to put up a resistance with a 145-ball 54 – his 44th first-class half-century. The 29-year-old struck four boundaries over the course of his stay.

There was, however, resurgence in the latter part of the day as Central Punjab’s Waqas Maqsood and Bilal Asif took two wickets each which had Khyber Pakhtunkhwa struggling at 61 for four.

Openers Musadiq Ahmed (22) and Israrullah (25) contributed 42 runs for the first wicket before they lost three wickets for seven runs.

By the virtue of taking eight or more wickets and dismissing the opposition under 200 runs inside 100 overs, Khyber Pakhtunkhwa pocketed six points. Central Punjab, languishing at the bottom of the points table, failed to get any bonus points for batting but added one for their bowling.

A 228-run partnership between century-makers Omair Bin Yousuf and his captain Asad Shafiq had Sindh placed at a comfortable 289 for five at the close of play after Zia-ul-Haq’s opening burst had them struggling at 37 for three.

In the match played at the National Stadium, Omair, the 21-year-old right-hand batsman, stroked an unbeaten 129 after arriving at the crease with his team 15 for two.

He was joined by Asad, who scored 123 from 195 balls before getting retired hurt, following the dismissal of Saud Shakeel (nine) by right-arm pacer Bilawal Bhatti. Asad, who had earlier decided to bat after winning the toss, smashed 17 fours.

Omair has hit 11 fours from the 210 balls he has faced to date and he will resume Sindh’s innings tomorrow with Saad Ali (11 not out).

Both the openers – Sharjeel Khan (five) and Jahid Ali (three) – were dismissed by left-arm pacer Zia, who returned two for 41 from his 14 overs. The other two wickets were taken by Bilawal Bhatti and Zahid Mehmood.

By the end of day one, Sindh had gathered two bonus points for batting, while Southern Punjab, who are at the top of the table, added a bonus point for bowling.

Balochistan opener Azeem Ghumman missed out on what would have been his eleventh century in first-class cricket by five runs in his side’s match against Northern at the National Bank Sports Complex.

The right-handed batsman faced 233 balls and struck eight boundaries on his way to 95 before he was dismissed by left-arm orthodox Mohammad Nawaz.

Following Northern captain Nauman Ali’s decision to not to contest the toss and elect to bowl first, Azeem stitched a crucial 105-run second wicket partnership with Ali Waqas, who scored 52.

Imran Farhat, the Balochistan captain who opened with Azeem, was the first wicket to fall as he was dismissed by his counterpart on 24. Nauman, the leading wicket-taker in the ongoing tournament, finished the day with three for 70 from 32 overs.

Wicketkeeper-batsman Bismillah Khan and Ayaz Tasawar will resume the innings for Balochistan on Saturday at 26 not out and 14 not out.

At UBL Sports Complex, Central Punjab won the toss and elected to bat

At the National Stadium, Sindh won the toss and elected to bat