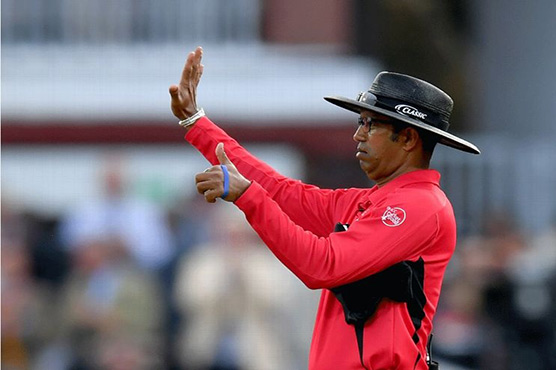 Allardice stated that the playing conditions did not allow the third umpire...to intervene.

ISLAMABAD (Dunya News) – For the first time after the epic World Cup 2019 final between New Zealand and England at Lord’s on July 14, the International Cricket Council (ICC) has come out in defence of umpire Kumar Dharmasena for his controversial decision to award six overthrow runs, instead of five, to England.

ICC’s general manager of cricket Geoff Allardice told ESPNcricinfo that the “right process” was followed while making the decision to award six runs to the eventual winners England.

“They (on-field umpires) had to make a judgement call on the day as to whether the batsmen had crossed when the throw was released,” Allardice stated.

“After everything that went on during that delivery, they got together over their comms system and made their decision. They certainly followed the right process when making the decision.”

Allardice also maintained that the playing conditions did not allow the third umpire or the match referee to intervene.

“They were aware of the law when they made the judgment about whether the batsmen had crossed or not at the time. The playing conditions don’t allow them to refer to such a decision to a third umpire. The match referee cannot intervene when the umpires on the field have to make a judgement call like that,” he mentioned.

“The consistent view has been that the World Cup final needs a winner and a Super Over was in the playing conditions to decide a tied Final in each of the last three World Cups (2011, 2015 and 2019),” he added.

“In a T20 innings, the clock would start at 85 minutes when the first ball is bowled, and countdown to zero. The aim is that players, umpires and fans will know that when the clock gets to zero the bowling team should have started the last over. If there is a delay or interruption in the match due to an injury or a DRS review then the umpire will push a button on a timer that adds time back onto clock,” Allardice said.