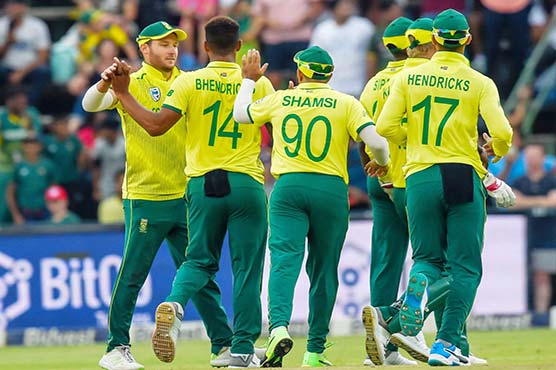 Pakistan were on track to overhaul South Africa's 188 for three until Azam was out in 17th over.

JOHANNESBURG (AFP) - Babar Azam hit a majestic 90 but Pakistan s long streak of series wins came to an end in the second Twenty20 international against South Africa at the Wanderers Stadium on Sunday.

South Africa took a winning 2-0 lead in the three-match series with a dramatic seven-run win. Pakistan had not lost a T20 series since they were eliminated from the World T20 in India in March 2016.

Pakistan were on track to overhaul South Africa s 188 for three until Azam was out off the first ball of the 17th over. It started a collapse in which six wickets fell for 34 runs in four overs.

The contrast between the two innings was stark. South Africa started slowly but stand-in captain David Miller plundered an unbeaten 65 off 29 balls as the hosts scored 127 runs off the last ten overs, including 29 off the final over bowled by Usman Shinwari.

Pakistan scored rapidly at the start of their innings, with Azam hitting the first three balls off Beuran Hendricks for four. It was 70 for one at the end of the six-over power play -- 26 runs ahead of South Africa s total at the same stage.

"We had the game but we couldn t finish it," said Pakistan captain Shoaib Malik.

The tempo of the game changed when Azam pulled a slower ball from Beuran Hendricks to deep midwicket after hitting 13 fours and a six in a 58-ball innings.

"We didn t start too well with the ball," said Miller, who was named man of the match. "We were too short and too wide but the bowlers pulled it back."

Although neither took a wicket, Miller praised left-arm spinner Tabraiz Shamsi and new fast bowler Lutho Sipamla for economical bowling in the middle overs before the late-innings collapse.

Miller, captaining South Africa for the first time because Faf du Plessis was rested for the last two matches of the series, hit five sixes and four fours in an explosive innings, which followed a similarly aggressive 45 off 27 balls by Rassie van der Dussen, who hit four sixes.

South Africa made a relatively sedate start on an unusually slow, dry Wanderers pitch. Left-arm spinner Imad Wasim, who opened the bowling, took one for nine in four overs. He bowled a maiden to new opening batsman Janneman Malan, who had an otherwise promising innings of 33 off 31 balls.

Earlier, South Africa set victory target of 189 runs for Pakistan in the second Twenty-20 International of the three-match series.

Stand-in captain David Miller hit an explosive half-century as South Africa made a strong finish to their innings in the second Twenty20 international against Pakistan at the Wanderers Stadium.

Miller slammed 65 not out off 29 balls to enable South Africa to post 188 for three in their 20 overs.

Captaining South Africa for the first time because Faf du Plessis was rested for the last two matches of the series, Miller went on the rampage in the closing overs after South Africa made a relatively sedate start on an unusually slow, dry Wanderers pitch.

Miller hit five sixes and four fours as South Africa scored 127 runs in the last ten overs of an innings which was interrupted for half an hour by a rain shower. The break came with South Africa on 140 for three after 17.1 overs and they added 48 runs off the remaining 17 balls of the innings.

New cap Janneman Malan and Reeza Hendricks put on 58 for the first wicket but used up 53 balls. Left-arm spinner Imad Wasim, who opened the bowling, took one for nine in four overs. He bowled a maiden to Malan and had the newcomer stumped after an otherwise promising innings of 33 off 31 balls.

Rassie van der Dussen hit four sixes in a quickfire innings of 45 off 27 balls to lift the scoring rate before Miller finished the innings with some ferocious hitting.

Pakistan won the toss and sent South Africa in to bat in the second Twenty20 international at the Wanderers Stadium.

Pakistan captain Shoaib Malik said the possibility of rain had influenced his decision to field first despite having failed by six runs in a chase in the opening match in Cape Town on Friday.

Malik said left-arm fast bowler Shaheen Shah Afridi would replace Faheem Ashraf in the Pakistan team. "We were lacking the ability to strike early in the first game," he said.

They replaced captain Faf du Plessis, who is being rested for the final two matches of the series, and batsman-wicketkeeper Gihahn Cloete.

"It will be nice to put a score on the board and put them under pressure," said stand-in captain David Miller, who said South Africa were keen to clinch the three-match series with a game to spare. Both captains noted that the pitch helped spin bowlers in a women s international match played earlier on the same surface.