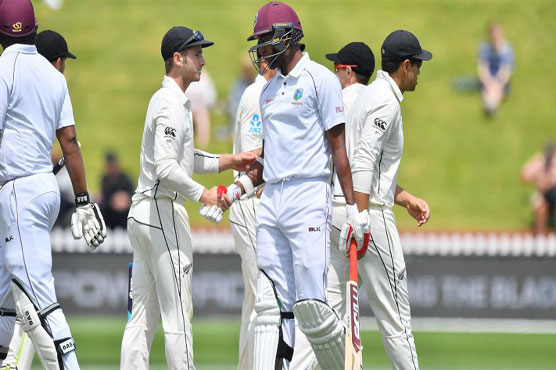 HAMILTON (AFP) - The West Indies are focussed on surviving Neil Wagner s short-ball barrages as they look to square the series against New Zealand in the second and final Test starting in Hamilton on Saturday.

The Caribbean visitors have historically been known for their own fast, intimidatory bowling, but were troubled by Wagner s rising deliveries in the first Test -- primarily from his short ball that angles in towards the rib cage.

Wagner was New Zealand s chief destroyer in Wellington with seven wickets in the first innings and nine for the match, which the hosts won by an innings and 67 runs.

"It s key to know what you want to do (against Wagner). Whether you re going to take it on or don t take it on," said Kraigg Brathwaite, the stand-in skipper after Jason Holder was suspended for a Test and fined for a slow over rate in Wellington.

"We re ready and had a good practice session yesterday and also today and we re looking forward to the challenge."

Brathwaite, who top scored for the West Indies with 91 in their much improved second innings in Wellington, said they had settled on an uncomplicated plan to try to save the series.

"Stick to the basics. You don t have to over-complicate it. Get a big first innings total, and obviously (it) will help us go far in the game a lot better."

New Zealand have been boosted by the confirmed return of swing bowler Tim Southee, who missed the first Test for the birth of his second child, in the only change to their line up.

But despite the lop-sided result in the first Test, New Zealand are braced for a West Indies fightback similar to the way the tourists recovered in England just four months ago.

After an innings loss in the first Test there, they won the second by five wickets.

"We know they came back hard against England when they lost the first game, and I m sure they ll do that again in this match," said New Zealand s senior batsman Ross Taylor.

On the eve of the Test the covers were on the Seddon Park pitch to prevent it over-cooking in an ongoing Hamilton heatwave, and the ground staff suspect there may be some variable bounce late in the Test.

But in recent years the wicket has built a reputation for producing runs, which is likely to put a focus on the race between Taylor and Kane Williamson to become New Zealand s most prolific century-maker.

The record of 17 is shared by the late Martin "Hogan" Crowe and current captain Williamson, with Taylor one behind on 16.

Taylor has scored three centuries and Williamson two in the past six Tests at Seddon Park, which is the home ground for both players.

"I know if I go through the right preparation, give myself the best chance and continually do that, I ll be able to get to 17, 18 or whatever," Taylor said after his net session on the eve of the Test.

"Seventeen is the benchmark that Hogan wanted me to get to and beat, beat his amount that he got but he said also carry on and don t stop there."

But Taylor, 33, said the 27-year-old Williamson had time on his side to do much better than that.

"Kane will probably end up with about 40, so we ll just work it out after that," he quipped.

Taylor was in sight of his 17th century in the first Test when he fell for 93 while Williamson, who averages 50.66, was out for one.