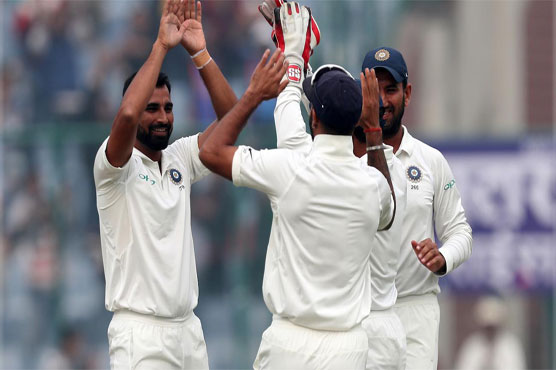 Sri Lanka were 31-3 while chasing a daunting 410-run victory target in the third Test against India.

NEW DELHI (AFP) - Sri Lanka were reeling on 31-3 while chasing a daunting 410-run victory target Tuesday in a pollution-tainted third Test in New Delhi blighted by scenes of bowlers vomiting on the ground.

Left-arm spinner Ravindra Jadeja struck twice in an over to rattle the visitors, who must bat out three more sessions to save the match and draw the series with top-ranked India.

Dhanajaya de Silva was on 13 and Angelo Mathews had yet to open his account when bad light stopped play at the smoggy Feroz Shah Kotla ground.

Fast bowler Mohammad Shami dismissed opener Sadeera Samarawickrama off a roaring bouncer but stopped in mid-over to vomit, crouching down and then gulping water.

He went on to complete the over but left the field shortly afterwards.

In the morning session it was Sri Lankan paceman Suranga Lakmal who threw up twice. He went to the dressing room briefly but returned to the field, bowling 14 overs and taking one wicket.

Groundsmen rushed in to cover the spot with sand and sawdust as smog in the heavily polluted Indian capital took centre stage for a fourth day in a row.

A doctor at the stadium examined three Sri Lankan players and said their vital signs were normal.

Skipper Virat Kohli, who made 50, declared India s second innings on 246-5 after Rohit Sharma reached his half-century in the final session, setting the visitors a formidable victory target.

No Test team has chased down 410 since 2003, when the West Indies defeated Australia after making 418 runs.

Earlier, Sri Lanka were dismissed for 373, conceding a 163-run lead to India who had declared on 536 for seven.

But it was the hazardous smog in Delhi that again dominated the day.

The US embassy website showed concentrations of the smallest and most harmful particles at 398 -- 15 times the World Health Organization s safe limit. Conditions were even worse on Monday.

The Board of Control for Cricket in India said late Monday that New Delhi could be dropped as a venue during winter, when pollution across the region spikes.

BCCI secretary Amitabh Choudhary said venues would be reconsidered "in view of the situation which was encountered in the last two to three days".

"The BCCI has been sensitive on the smog and fog matter over the years," he added.