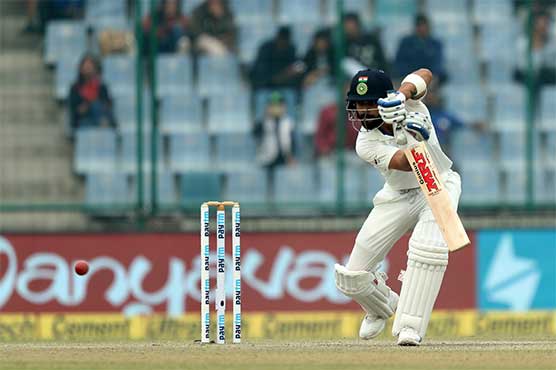 The highest successful run chase in the fourth innings of a Test was by the West Indies who defeated Australia after making 418 in 2003.

Sri Lankan fast bowler Lakmal, who was forced to return briefly to the dressing room after vomiting twice while fielding, bowled 14 overs and claimed a wicket.

Groundsmen rushed in to cover the spot with sand and sawdust as air pollution in the Indian capital took centre stage for the fourth day in a row.

A doctor at the stadium examined three Sri Lankan players and said their vitals were normal.

Earlier, Sri Lanka were dismissed for 373, conceding a 163-run lead to India, who had declared at 536 for seven.

But it was the hazardous smog in one of the world’s most polluted cities that again dominated proceedings.

The website of the US embassy in New Delhi showed the air quality index at 398, 15 times the World Health Organization’s safe limit. Conditions were worse on Monday.

The Board of Control for Cricket in India said late Monday that New Delhi could be left off future fixture lists during the winter season when pollution in the region peaks.

BCCI secretary Amitabh Choudhary said venues would be reconsidered "in view of the situation which was encountered in the last two to three days."

"The BCCI has been sensitive on the smog and fog matter over the years," he added.