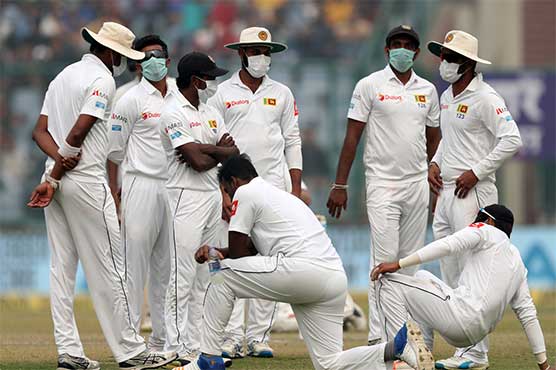 Many of Sri Lanka’s fielders returned from lunch on the second day wearing masks amid visible haze at the Feroz Shah Kotla stadium.

A short while later play was halted for around 20 minutes as Sri Lanka complained to the umpires about the smog.

The US embassy website Sunday showed levels of the smallest and most harmful airborne pollutants in Delhi at 328 -- more than ten times the level considered safe by the World Health Organization.

The Test was delayed as the umpires consulted the match referee, team doctors and physiotherapists before deciding to resume play.

But the visitors protested twice more and pacemen Lahiru Gamage and Suranga Lakmal returned to the pavilion, meaning the Sri Lankans were running short of fielders.

This prompted Indian skipper Virat Kohli to declare his first innings on 536 for seven to get the Sri Lankan fielders off the ground.

Play is routinely suspended due to poor weather, low visibility, lightning or rain but a stoppage as a result of pollution is almost unheard of.

"It is definitely a first of its kind," said one commentator on the official television broadcast.

Last month more than 30,000 runners competed in the Delhi half-marathon, despite dire health warnings from doctors who called for the race to be postponed.

Other top-level sporting events in Delhi, such as international cricket and golf tournaments, have attracted less attention despite the hazardous levels of pollution.

A smog outbreak last month in the Indian capital -- an incident described by doctors as a public health emergency -- saw schools shut for days as pollution soared to 40 times the safe WHO levels.

Delhi’s air quality typically worsens in winter as cooler air traps pollutants near the ground, preventing them from dispersing into the atmosphere -- a phenomenon known as inversion.