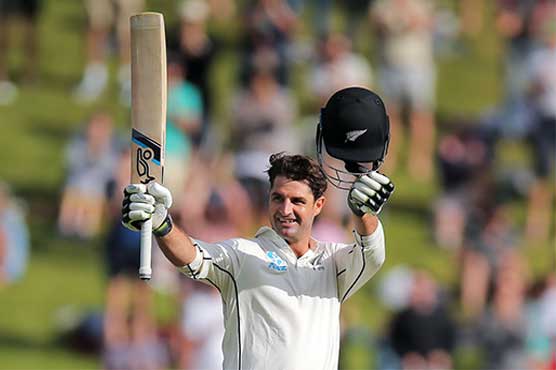 At stumps New Zealand were 447 for nine, holding a 313-run lead over West Indies.

WELLINGTON (AFP) – New Zealand were aiming for an early finish to the first Test against the West Indies after Colin de Grandhomme cracked his maiden Test century off just 71 balls to leave the tourists reeling at stumps on day two in Wellington on Saturday.

The West Indies compared the big-hitting de Grandhomme to their own whirlwind stars Chris Gayle and Andre Russell as the New Zealander smacked the ninth-fastest Test century of all time, making light of a tiring attack and plundering the boundary.

At stumps New Zealand were 447 for nine, holding a 313-run lead after the West Indies were rolled for 134 in their first innings.

"We’re in a real good position at the moment," said de Grandhomme who was eventually out for 105 after a rollicking innings that included three sixes and 11 fours.

The Harare-born 31-year-old showed no sign of nerves as he plundered the bowling, saying the maiden century was not as important as keeping the West Indies in the field as long as possible.

"I know it’s a milestone but for me it’s just keep batting the way you’re going," he said.

Miguel Cummins, who claimed de Grandhomme’s wicket, was impressed with what he saw.

Cummins, however, believed the tourists would perform better in their second innings.

"The guys are really pumped up about batting again. They know where they fell down in the first innings and they’re looking to make amends in the second."

Ross Taylor and Henry Nicholls set the stage for New Zealand’s all-out attack with their 127-run stand for the fourth wicket which led to de Grandhomme and Tom Blundell adding 148 for the seventh.

Blundell was unbeaten on 57 at stumps to go with Taylor’s 93 and 66 for Nicholls on a day in which New Zealand scored 362 runs, lost seven wickets and left the West Indies exhausted.

De Grandhomme, who went to the crease when Nicholls was dismissed on the second ball after tea, used the first delivery he faced from Cummins as a sighter and then smacked boundaries off the next two.

It was big hitting with minimal risk as he raced to 99 and then reached his milestone century steering a Cummins delivery wide of point for three.

But in the following over he was deceived by a slower ball from Roston Chase which was chipped to Kieran Powell at long on.

Taylor was closing in on his 17th century to equal the New Zealand record held by his mentor, the late Martin Crowe, and current captain Kane Williamson, when he fell lbw to Kemar Roach shortly before tea.

After resuming the day at 85 for two, Jeet Raval was the first wicket to fall when he was caught behind off Roach for 42 in the 10th over of the morning while Taylor went nine overs before tea.

For most of the day Windies skipper Jason Holder placed defensive fields with a limited cordon behind the stumps as he employed the short-ball tactics which had worked to good effect for New Zealand the previous day when Neil Wagner took seven for 39.

Roach was the most successful of the West Indies bowlers with three for 73 while Cummins and Chase got two wickets apiece.