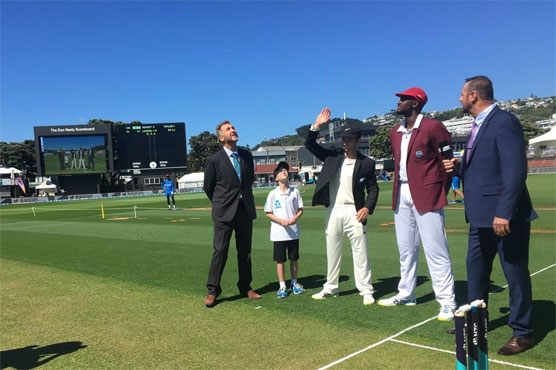 New Zealand won the toss and elected to bowl in the first Test against the West Indies of Friday.

WELLINGTON (AFP) - New Zealand won the toss and elected to bowl on a green-tinged Basin Reserve wicket in the first Test against the West Indies in Wellington on Friday.

Captain Kane Williamson said the nature of the wicket meant there were opportunities for an early breakthrough.

"I don t think it s as green as some in the past so it s important we put the ball in the right areas and we ll get rewards early," he said.

New Zealand have gone for three fast bowlers and the spin option of Mitchell Santner while the West Indies have opted for an all pace attack.

The tourists go into match following a recent diet of Tests -- including wins over Zimbabwe and England -- and are looking for their first victory in New Zealand since 1995.

Sunil Abris will make his debut for the West Indies after producing a sparkling 153 off 145 balls in their warm-up game against New Zealand A this week, while 20-year-old Shimron Hetmyer will be playing his fourth Test.

The last time the two teams met at the Basin Reserve, four years ago, they were beaten by an innings and 73 runs after Holder won the toss and put New Zealand into bat.