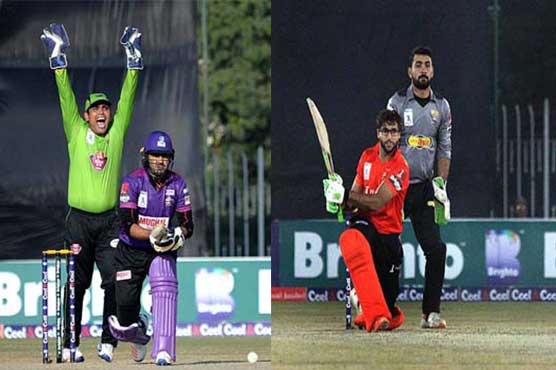 The match will be played at the Rawalpindi Cricket Stadium.

RAWALPINDI (Dunya News) – The final match of National Twenty20 Cup will be played in Rawalpindi on Thursday (today) in which Lahore Blues and Lahore Whites will lock horns to claim the trophy.

The match will be played at the Rawalpindi Cricket Stadium. Lahore Region Whites outclassed Faisalabad Region by 10 runs in the first semifinal on Wednesday.

In reply, Faisalabad Region went 10 runs short to achieve the target and were all out after scoring 132 runs in 19.4 overs. Sohaib Maqsood 39 and Imran Khalid 34 played well. For Lahore Region Whites, Wahab Riaz 2 for 15, Umaid Asif 2 for 30, Amir Yamin 1 for 15 and Bilal Asif 1 for 21 took wickets.

In the second semifinal, Lahore Region Blues beat FATA Region by 10 runs on the same day.

Lahore Region Blues scored 221 runs for 1 in 20 overs while batting first. Ahmed Shahzad 104 not out, Imam-ul-Haq 62 and Muhammad Hafeez 52 not out batted well. For FATA, Muhammad Irfan took the only wicket for 35 runs.

It is worth mentioning here that Pakistan Cricket Board (PCB) had rescheduled the semifinals and final match of the National T20 Cup amid political tensions in the twin cities due to protests.

The unrest in Rawalpindi was caused by security operation against the Faizabad sit-in. The semifinals and final were initially scheduled on November 26 and November 27 respectively, in Rawalpindi where the whole tournament took place.

With inputs from APP