Saeed Ajmal gets guard of honour after last game 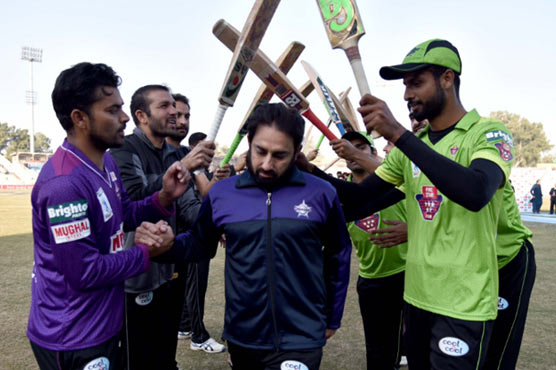 Saeed Ajmal gets guard of honour after last game

The magician spinner thanked his parents, wife and fans for supporting him throughout the journey

RAWALPINDI (Dunya News) – One of the best off-spinners produced by the country, Saeed Ajmal retired from all cricket formats today after playing his final domestic game in National T20 Cup.

He was presented a guard by honour by Lahore and Faisalabad cricketers after the semi-final game in which his team faced defeat. The Faisalabad skipper picked up one wicket in his last T20 match while scoring a golden duck with the bat.

@REALsaeedajmal the magician bids the field good bye for the one last time. #ThankyouSaeedAjmal pic.twitter.com/zo0x6Yav9t

During his retirement press conference today, he slammed ICC for only targeting Pakistani spinners over the controversial 15-degree limit bend for bowling action rule. He also complained about the PCB for not supporting him during the rough patch.

Ajmal commented on the recent bowling suspension on all-rounder Mohammad Hafeez saying there is not much of an issue with the action. “Off-spin bowling art is being eliminated from Pakistan through a conspiracy,” he added.

Ajmal had a short, but eventful career in which he rose to the heights of bowling rankings in a quick succession. His lethal bowling on spinning tracks used to perplex even the best in the game.

End of an amazing career!@REALsaeedajmal has retired from all forms of cricket, in has last match he ended up with figures of 1/13 in his 4 overs. Pakistan & #ISLU are indebted to your services, Champion. We are proud to have him in our coaching staff!#ThankYouAjmal pic.twitter.com/LQSoTRdlNH

He picked up a total of 447 wickets in all formats. He averaged the best in T20s while his wicket taking capability was at the peak in Tests. His regular off-spin, dosra and other spin varieties helped him reach the top.

He had earlier announced to say goodbye to playing cricket after representing Pakistan the green shirts in Tests, ODIs and T20 matches. He was given chance to represent the green shirts at the senior age of 30 and his career. The thriving career of Saeed Ajmal met its demise after International Cricket Council (ICC) slapped a ban on the cricketer following its new rules. His action was declared illegal after several umpires reported against him and he was gone through a bowling test.

He made a comeback with a reformed bowling action against Bangladesh, but couldn’t create the same impact. Once dropped from the squad, Ajmal couldn’t appease the eyes of the selectors.

After playing for Islamabad United in the first two editions of Pakistan Super League (PSL), he has switched to the role of bowling coach for the third edition. He will now spend his time nurturing the upcoming talents.