Australia on cusp of big Ashes win over England 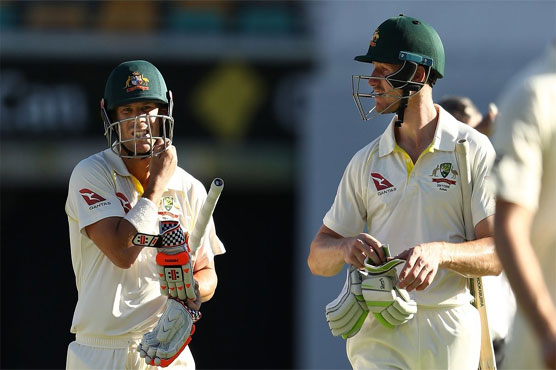 Australia on cusp of big Ashes win over England

Australia require another 56 runs on the final day to win first Ashes Test against England.

BRISBANE (AFP) - Openers David Warner and Cameron Bancroft breezed to an unbroken century stand on Sunday, leaving Australia needing just 56 runs to go one up in the Ashes series after England imploded.

The tourists were skittled out for 195 off 71.4 overs, losing their last six wickets for 82, as the Test swung Australia s way on the fourth day at the Gabba.

The Australians, unbeaten at their Gabba fortress since 1988, were chasing down 170 runs to win and made easy work of the 34 overs to the close.

At stumps, they were 114 without loss with Warner unbeaten on 60 and Bancroft not out 51.

"Obviously, if we can knock off these runs tomorrow it puts us in a very strong position heading to Adelaide (second Test) and England has to chase us from now on," he added.

"It s a great spot for us to be in heading into day five of the first Test match. I d rather be in our change room than theirs."

Warner powered to his 25th Test fifty off 74 balls with seven fours, while Bancroft reached his first Test 50 off 111 balls.

Bancroft, playing in his first Test match, showed the flinty side of his character when he took a direct throwback from bowler Jimmy Anderson near his groin without flinching.

It was 50-50 between the traditional rivals over the first three days, raising England s hopes of a first win at the ground in 31 years.

Much depended on Joe Root producing a captain s knock after senior batsman Alastair Cook failed again, but once Root was out on Sunday, England dissolved.

Hazlewood trapped Root leg before wicket with a delivery that nicked back off the seam to the back-slapping jubilation of the Australians.

Root was rapped on the knee roll of his pad but surprisingly did not seek a review given the vital importance of his wicket.

Hazlewood, who removed Cook and James Vince late on Saturday s third day, finished with three for 46 off 16 overs.

"I thought the first three days we played well and we were in the game and then today we let ourselves down with the bat especially, we got in and never really got on to get that score that we needed."

Off-spinner Nathan Lyon started the ball rolling for the Australians on day four when he dismissed in-form opener Mark Stoneman (27) and Dawid Malan (4), both caught by Steve Smith at slip.

Lyon also removed Moeen with a contentious stumping by wicketkeeper Tim Paine for 40. The TV umpire needed repeated replays before deciding that the Englishman s back foot was not behind the crease.

Lyon finished with three for 67 and has now taken 274 wickets in 70 Tests, the highest number of wickets by an Australian off-spinner.

Starc chipped in with the wickets of Jonny Bairstow, Chris Woakes (17) and Stuart Broad to finish with three for 51.

Bairstow hit 42 off 75 balls before he ramped one over the slips and gave a regulation catch to Peter Handscomb at third man.

Broad was out caught behind for two to a faint speck detected on the infrared "Hot Spot" technology on review, while Woakes was Smith s fourth catch of the innings.

The third paceman Pat Cummins mopped up the England innings when he had Jake Ball caught behind off a vicious short ball for one.

Australia have a formidable record at the Gabba, where they have not lost a Test match since falling to Viv Richards  West Indies 29 years ago.