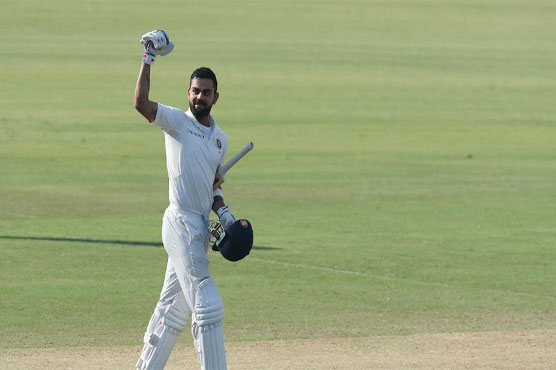 Sri Lanka were 21 for one at stumps on the third day of second Test against India.

NAGPUR (AFP) - Skipper Virat Kohli hit a blistering double century to hand India a massive first innings lead of 405 as the hosts tightened their grip on the second Test against Sri Lanka on day three on Sunday.

India declared on 610-6 after Rohit Sharma (102) had completed his hundred, as they seek to go one up in the three-match series.

The visitors were in early trouble on 21 for one at stumps in Nagpur, still trailing India by 384 runs.

Dimuth Karunaratne, on 11, and Lahiru Thirimanne, on 9, were at the crease after paceman Ishant Sharma bowled Sadeera Samarawickrama for 0 with the second ball of the innings.

The day belonged to Kohli, who hit a majestic 213 before falling to off-spinner Dilruwan Perera. He walked off to a standing ovation from a raucous crowd.

Kohli, who started the day on 54, smashed 17 fours and two sixes during his 267-ball knock.

"He is a kind of player who performs well in all formats of the game," Cheteshwar Pujara, who shared a 183-run third-wicket partnership with Kohli, said of his captain.

"I think it s his confidence. And the way he is batting in the last two-three years, it would have been difficult for any other batsman to score with such a strike rate," Pujara told reporters.

It was the star batsman s fifth 200-plus score in his 62nd Test. He has also achieved double centuries against the West Indies, New Zealand, England and Bangladesh.

After the third-wicket marathon partnership, Kohli and Rohit Sharma put on 173 for the fifth wicket to pulverise a deflated Sri Lanka attack that sent down 176.1 overs in about six sessions of play.

Kohli received able support from Sharma, who reached his 50 before tea and then stepped up a gear to amass runs all around the ground and register his third Test hundred.

Kohli s earlier marathon stand stand with his overnight partner Pujara, who made a composed 143, had taken the steam out of the attack.

Pujara was bowled by paceman Dasun Shanaka in the first session, but Kohli kept scoring quickly as his team chased an innings victory.

"I think it was difficult to score runs as this wicket was on the slower side. It wasn t easy to get boundaries and we had to rotate the strike," said Pujara.

"But I think, going forward in this game, the ball has started turning and we are hoping Day 4, spinners will come into play. And at the same time there is variable bounce for fast bowlers, Ishant and Umesh (Yadav) will also come into play."

Kohli s score was his 10th international century (four in Tests and six in one-day internationals) of the year -- the most by any captain in a calendar year.

Australia s Ricky Ponting had hit nine hundreds across two formats in 2005 and 2006, while South African Graeme Smith once had nine centuries to his credit.

Ajinkya Rahane, who was out to Perera for two, and opener Lokesh Rahul were the only two specialist batsmen to miss the Indian run fest of one double century and three centuries.

The first century had come from Murali Vijay (128), who along with Pujara had put India in the driving seat with a 209-run second-wicket partnership after Rahul s early departure on day one.

Sri Lanka s fast bowling coach Rumesh Ratnayake urged his players not be discouraged by the hammering, saying they can take a leaf out of the Indian batsmen s book.

"We want to be positive. If yout take the Indian innings, they were positive and we can take that as a lesson. Trying to get the confidence back," Ratnayake said.

The rain-hit first match of the series in Kolkata ended in a draw.