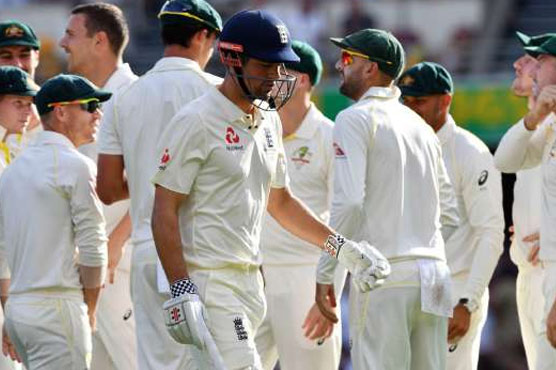 The Australian skipper played one of his greatest Test knocks with an unbeaten 141, forged over eight and a half hours, to deliver his team a 26-run lead over the tourists on the third day.

Paceman Hazlewood compounded the tourists  woes with the wickets of Alastair Cook (7) and James Vince (2) in his opening two overs before a nasty Mitchell Starc lifter thundered into Joe Root s helmet grille late in the day.

At the close with two days left, England were hanging on in a torrid ending to the day at 33 for two, leading by just seven runs with Root, on five, and Mark Stoneman, on 19, at the crease.

England captain Root did everything to remove the obdurate Smith with  Bodyline -style field placings, but the world s top-rated batsman laid waste to the tourists  well-laid plans to give the Australians the advantage at the Gabba, where they haven t lost a Test since 1988.

"I think we re in a reasonable spot being around 30 in front -- we didn t look like we were going to get there for a while," Smith said.

"It just meant a lot. Ashes series are always huge. As a captain, I want to lead from the front as much as I can with my performance and the way I bat.

"The previous three days mean nothing if we don t get it right tomorrow. It s in our hands," he said.

"If someone goes and plays a Steve Smith-type knock (that) gets the bowlers into their third and fourth spells tomorrow we re in the driving seat."

It was an uncharacteristic knock by the shotmaker Smith, with his 21st Test century built on unwavering concentration and patience to defy all of England s efforts to dislodge him.

When Australia s first innings finally ended, Smith was still there after 326 balls over 514 minutes with 14 fours.

Smith -- who averages 61.23 in 57 Tests but 72.46 as Test captain, second only to the great Don Bradman -- consummated his indomitable hundred with a cover drive for four off Broad to a huge roar from the home crowd.

The fidgety Smith was tied down by meticulous England bowling and fielding after losing three batting partners in the morning session, before paceman Cummins joined him at 209 for seven in the 82nd over.

Cummins played a pivotal supporting role for his skipper, overtaking his previous highest Test score of 33 with 42 in his first Test match at home, and helped put on a crucial 66-run stand.

The tourists view the Australian captain as their number one target in the series, and Smith showed just what a hugely influential player he is, escaping the shackles to claim yet another century.

Root s field strategy for Smith was likened to Bodyline, a notorious leg theory bowling tactic devised by England on their 1932-33 tour of Australia, specifically to negate the dominant batting skills of Don Bradman.

The England skipper placed six fielders on the leg-side with three in the deep and had no-one in front of the bat on the off-side while his pacemen ripped in short-pitched deliveries to Smith for a time.

Marsh reached his eighth Test fifty -- his first in an Ashes match -- before he was deceived by a slower ball from Broad and lobbed a catch to James Anderson at mid-off.