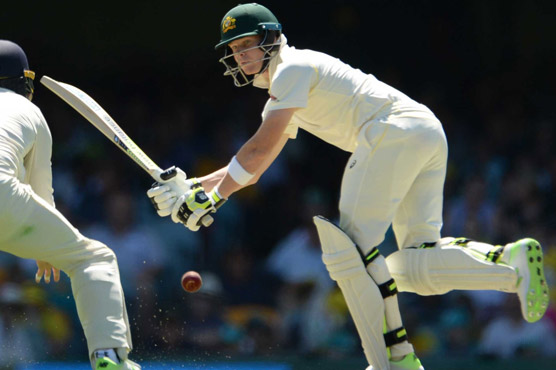 BRISBANE (AFP) - Skipper Steve Smith led a rescue mission to revive Australia s fortunes after a top-order batting collapse in the Ashes Test against England in Brisbane on Friday.

Home hopes rested on Smith to mount a fighting rearguard after the loss of four wickets in a faltering chase after England s first innings of 302 at the Gabba.

At the close on the second day, the Australians were 165 for four and trailing by 137 runs, with Smith unbeaten on 64 and Shaun Marsh not out 44.

It left the match intriguingly poised once again after England ended day one in a similar position before collapsing before lunch on Friday.

Smith was then thrust into another high pressure situation after Australia suffered a now-familiar malfunction at the top of the order.

"He s number one batter in the world, he knows his game better than anyone else and he goes out there and sticks to a plan and a process and it works for him, so hats off to our captain," said Australia spinner Nathan Lyon.

England had done their homework, encircling Smith with fielders and trying to frustrate the fidgety Australian captain into playing a rash shot.

But Smith, Test cricket s top-rated batsman, stepped up to the challenge with a defiant knock off 148 balls.

Marsh, 34, recalled for an eighth time to the Test team, provided stout support to his skipper off 122 balls to share in an unbroken 89-run stand.

"As a team we re happy. We ve done a lot of research and a lot of work on our plans to each batter. We executed them well today," England paceman Jake Ball said.

The tourists had the Australians on the ropes with three batsmen out in the middle session, including the prized scalp of David Warner.

Warner attempted to pull newcomer Jake Ball through the leg-side only to find Dawid Malan at short mid-wicket for 26 off 43 balls.

That left the Australians on a shaky 59 for three after the dismissals of debutant opener Cameron Bancroft and the misfiring Usman Khawaja.

Bancroft lasted 19 balls in his first Test before he edged a Stuart Broad lifter for five.

Khawaja was deceived by Moeen Ali s spin playing forward, and fell leg before wicket for 11. It was the 17th time Khawaja has been dismissed by spin in 42 Test innings.

Peter Handscomb joined them after tea when he was struck on the back pad and given out leg before wicket to James Anderson for 14 on review.

Earlier, England lost their last six wickets for 56 to fold for 302 all out in their first innings at lunch.

The tourists were looking solid in an 83-run partnership between Malan and Moeen Ali before Malan s dismissal triggered a clatter of wickets.

Root s team tumbled from 246 for four to be all out with fast bowlers Mitchell Starc and Pat Cummins each taking three wickets and spinner Lyon two.

Ashes debutant Malan, the Middlesex left-hander, uncorked 11 fours in his third Test fifty before he top-edged Starc and was caught by Marsh at deep square leg for 56.

Seven balls later, in the 104th over, Lyon removed all-rounder Moeen leg before wicket for 38, with the dismissal confirmed on review.

Lyon, who was proving a handful with his drift and turn, struck again with the first ball of his next over, bowling Chris Woakes for a duck.

Wicketkeeper Jonny Bairstow followed shortly afterwards for nine, as he dollied Cummins to Tim Paine for the gloveman s first catch after seven years in the Test wilderness.

Ball smacked three fours before he was snapped up by a diving Warner at leg slip off Starc for 14, and Broad was dropped by Marsh before he went for 20 to an outfield catch by Handscomb.