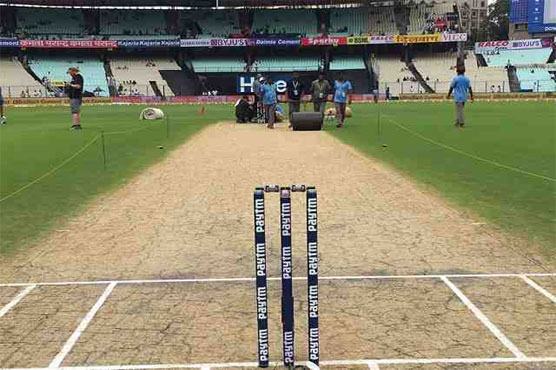 Nagpur pitch is expected to favour the fast bowlers in the second Test starting today (Friday).

The hosts laid out a green pitch in the opening Test in Kolkata, and Nagpur is also expected to favour the fast bowlers in the second Test starting Friday.

The three Sri Lanka Tests come before India, the world s top-ranked team, embark on a three-Test tour starting January in South Africa, where they have never won a Test series.

Kohli confirmed reports that team management had ordered fast pitches, instead of the traditional spin-friendly tracks, to get used to South Africa-style conditions.

"Yes, because unfortunately we get only two days before we fly to South Africa after this series is over," Kohli told reporters.

"So we have no choice but to be in game situations and think of what s coming ahead for us... As usual cramped for time, which I think we needed to assess in future as well."

Bhuvneshwar Kumar led an inspired Indian pace attack that took all of the 17 Sri Lankan wickets that fell during the rain-hit first Test, which ended in a draw.

Kohli said he wanted his players to get used to the fast and bouncy tracks that await in venues like Johannesburg and Cape Town, which will host the opening Test.

"We thought this is an ample opportunity for us to challenge ourselves, put us in a situation... As I said, we want to embrace being in difficult conditions," said Kohli.

"I am not saying everyone will go out and perform immediately but if we can feel comfortable about it after one, two or three innings everybody will come good and once you come good we will get that confidence," he said.

Sri Lanka captain Dinesh Chandimal called it a "good Test wicket" and backed his top spinner Rangana Herath to come good in Nagpur, after he went wicketless in Kolkata.

"We saw so much grass at Eden Gardens, this is much less. This looks a good Test pitch. It s a challenge for us as a team," Chandimal said.

"Of course Rangana Herath is a wily old fox. On these wickets he can be handy. We have Dilruwan (Perera) as well in our ranks."

The spin duo have delivered 19 five-wicket hauls between them in Asia since the 2015 South Africa series, as well as valuable contributions with the bat.

"We count them as all-rounders because they have proven themselves in difficult situations and they have made important contributions for the team," he said.

"So they are not tail-enders any more, they are proper all-rounders. (Their) ranking does justice to that. It gives us good balance when we play them both."