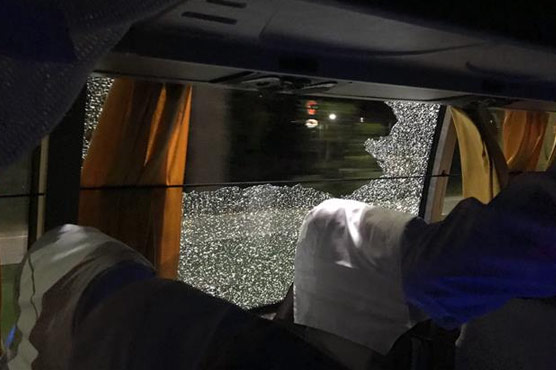 (Web Desk/AFP) – Australian cricket team was attacked while heading back to hotel after clinching victory over India in second T20. Rocks were thrown at their bus which spread fear among the players.

Aussie batsman Aaron Finch shared photograph of the terrible incident in which the window of team vehicle looks shattered by the rocks. "Pretty scary having a rock thrown through the team bus window on the way back to the hotel," said Finch in his tweet which was retweeted by other players also.

Pretty scary having a rock thrown through the team bus window on the way back to the hotel!! pic.twitter.com/LBBrksaDXI

It is the second time that Aussie team bus has been hit by a projectile as it had also happened in Bangladesh. People across India and all other the world have condemned the incident. Indian authorities have announced to beef up the security arrangements for the final game to come. Only one T20I is left in the three-match series which is leveled by one all. India had previously won the ODI series.

Earlier, Fast bowler Jason Behrendorff led an inspired bowling effort to help Australia down India by eight wickets in the second Twenty20 international and level the series in Guwahati on Tuesday.

Behrendorff, playing his second match after making his debut in Ranchi last week, claimed four wickets to bowl out India for 118 before the visitors chased down the total with 27 balls to spare.

Moises Henriques, who hit 62 after being promoted to number three, and Travis Head, who made 48, put together an unbeaten 109-run partnership to keep the three-match series alive.

Australia lost two early wickets including skipper David Warner, but the 119-run target proved too little for the Indian bowlers to put pressure on the new batsmen.

The right-left batting combination of Henriques and Head played sensible cricket to deny the hosts any further chance of creating trouble.

Henriques hit four fours and four sixes during his 46-ball knock while Head also attacked the Indian wrist spinners with some good footwork.

But it was Behrendorff s left-arm pace that set up the match for Australia after the lanky bowler returned impressive figures of 4-21.

The 27-year-old Behrendorff rattled the Indian top-order, reducing them to 27-4 after getting opener Rohit Sharma and skipper Virat Kohli, for nought, in the first over of the innings.

Kedar Jadhav and Mahendra Singh Dhoni, who made 13, then tried to stem the rot during their 33-run partnership but leg-spinner Adam Zampa broke through the duo s defences.

Zampa got Dhoni stumped on a classic leg-spinner and then bowled Jadhav with the googly.

Hardik Pandya hit a 23-ball 25 to take India across the 100-run mark, which had seemed tough at 70-7, but the batsman s dismissal saw the innings fold on the last ball.

The final game will be played in Hyderabad on Friday.

Before signing Race 3, Salman Khan had put down these 3 conditions