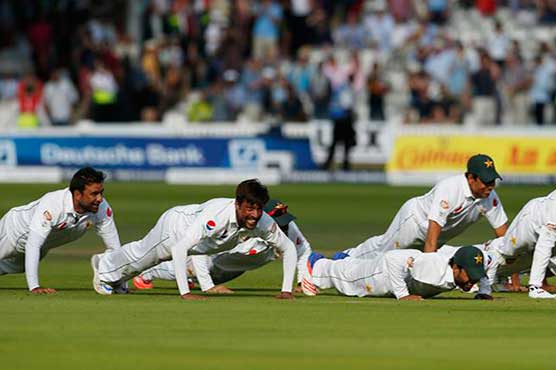 Najam Sethi said that the players have been stopped from push-ups to avoid further reaction.

ISLAMABAD (Dunya News / AFP) – The matter of cricketers’ victory push-ups has been echoed in the session of Senate Standing Committee on Sports after which the players have been barred from carrying out the move further.

Rana Afzal, a member of National Assembly, raised question that why players remain silent over defeat and do push-ups on victory.

To whom they are conveying message by such actions, he asked.

He said Misbah set this trend to mark the win which was later followed by other players.

Have you ever seen a celebration like this?! #EngvPak https://t.co/bbGH9lfMpG

"I promised the army personel I would do the push-ups if I got a century," Misbah told reporters after stumps.

The team also celebrated their triumph over England in the first Test at Lord‘s with a series of press-ups.

Government likely to keep petroleum prices steady in next month

No one can stop us from November 2 protest: Imran

Terrorists operating from across the border: Interior Minister