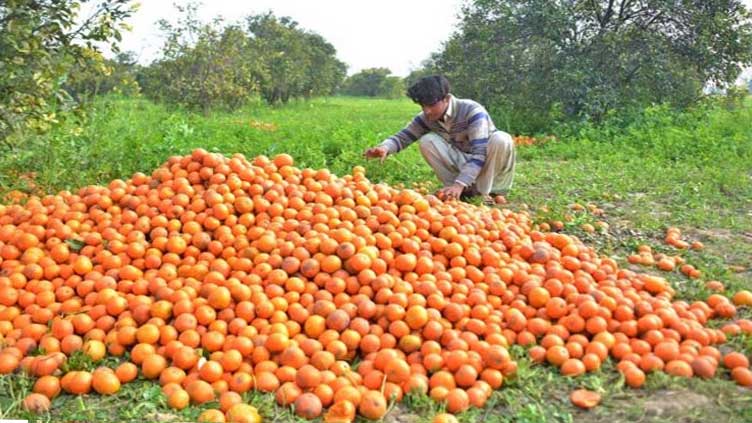 ISLAMABAD (Dunya News) - The prices of oranges may rise this winter as the production recorded a very low (50 percent) due to acute canal water scarcity and unexpectedly higher temperatures during the flowering stage of plants, the Pakistan Business Forum (PBF) said.

PBF Vice President Ahmad Jawad said ‘kinnow’ (orange) exports will resume from the 1st week of December, and the rate at farm price will be Rs. 2,000 per mound, according to the notification of the district administration due to less quantity.

In order to facilitate exporters, the State Bank of Pakistan should properly facilitate them precisely for Iranian and Russian markets to issue timely E-forms and make special arrangements for banking channels, he urged.

Jawad lamented that the State Bank of Pakistan (SBP) could not open formal banking channels both for Iranian and Russian markets for the last couple of years due to which their potential could not be tapped.

He said that the Iranian market can absorb between 60,000 and 80,000 tons of kinnow, while the size of the Russian-Ukrainian-Belarus market (the largest citrus importer in the world) for Pakistani citrus fruit may be doubled from the present around 50,000 tons within no time provided the government establishes proper banking links with the two markets.

PBF official also said that with an average annual harvest of 2.4 million tons, citrus contributes about 30 percent to total national fruit production, which is increasing at an annual rate of 1.5 percent for the last two decades or so. During this period its export has expanded rapidly by 17 percent per annum.

He further informed that China-Pakistan Horticulture Research and Demonstration Centre (CPHRDC), a collaboration between Huazhong Agricultural University (HZAU) and the University of Agriculture, Faisalabad (UAF), was unveiled. Certificates were awarded to the joint research project in charge at the site.

CPHRDC is an international research and demonstration facility at Huazhong Agricultural University in Wuhan, Hubei Province, China. It is home to a variety of research projects and programmes focusing on various topics, including fruit and vegetable breeding, labor-saving and high-quality horticultural crop production, post-harvest management, greenhouse production, and more. The center will also host numerous educational events and workshops, making it a valuable resource for horticultural academia and industry.

The joint research projects under CPHRDC for 2023–2024 include citrus variety evaluation, popularization, and the R&D demonstration of high-quality production technology, research and training on post-harvest quality maintenance and standardization of post-harvest operation of citrus fruit, research on germplasm enhancement and cultivar extension of solanaceous vegetables, and landscape horticulture management and construction technology.