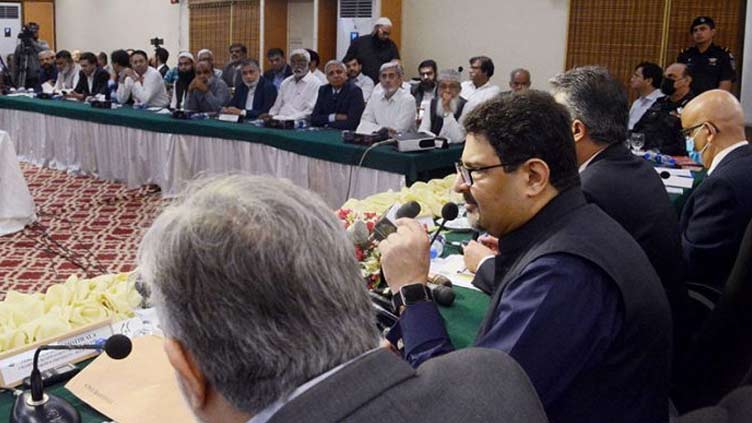 KARACHI (Dunya News) – Federal Minister for Finance & Revenue, Dr. Miftah Ismail Tuesday clarified that, “Macro economic stability was forthcoming with the IMF programme resuming before end of August as all conditionalities had been met.

He expressed these views in the meeting hosted by Pakistan Stock Exchange (PSX), said the statement released here.

With regard to tax measures, the minister stated, “Fiscal discipline will be strictly followed and all additional expenditures will be fully funded by tax measures. 10 percent Super Tax is only imposed for one year while alternative revenue streams are developed. ADR linked tax on banks will not be imposed retrospectively and tax revenues from the retail sector are expected to be significantly more compared to last year.”

The meeting involved discussion on proposals presented by PSX to the Finance Minister for the sustainable development of the capital markets.

This follow-up meeting came on the heels of the visit of the Finance Minister to PSX on Friday (August 5).

The MD PSX welcomed the finance minister and other participants and thanked them for their presence at this follow-up meeting.

The MD PSX re-emphasized that the situation in the capital markets needed to be addressed on a war-footing.

In terms of the macroeconomic situation prevailing in the country, the participants emphasized that government’s funding should be strong and taxation measures should be equitable.

Movements in PKR/USD exchange rate have been too volatile and changes to this effect should be gradual.

As perhaps the largest stakeholder in the market, the government will benefit directly by developing better funding alternatives, improved documentation and higher tax revenue, as well as avail the broader benefits that accrue to an economy on account of having developed capital markets.

These obstacles are resulting in an AML and tax driven distortion amongst asset classes which is detrimental to efficient allocation of scarce resources in Pakistan; hence creating challenges on both demand and supply sides for the capital markets.

In terms of taxation, the participants of the meeting pointed out that even though the stock market is undoubtedly one of the most documented sectors of the economy, however, income of listed companies is subject to double tax, at the company level and later on dividends distribution level as well, whereas unincorporated businesses are subject to substantially lower taxes. It was emphasized that this inequity in taxation is discouraging corporatisation and documentation.

In the medium term this will be a revenue positive measure since FBR will collect both CGT and higher income tax from both the listed companies and other companies in the supply chain of the listed companies, provide a small tax rebate to any listed company that pays more than 50% of profits as dividends, reinstate exemption on inter-corporate dividend under clause 103c for group relief which will significantly improve capital formation and investments, and grandfather tax position of companies at the time of new listing on PSX, particularly for smaller companies listing on the GEM Board of PSX.

A key concern expressed at the meeting was the treatment of CGT. The Finance Bill 2022 addressed this issue through introduction of reduced rates based on holding period.
However, the final Amended Finance Bill 2022 has again created tax disparity between securities and immovable properties. This was termed unfair and against the stated policy of GoP.

In terms of non-tax measures, it was emphasized that SOEs like State Life, DFIs like Pak Kuwait, PPP, and CPEC projects be encouraged to list and raise debt from the capital market. This will allow the GoP to release their equity and reinvest it in new projects, while growing the size of the market, a key matric to be included in the MSCI Emerging Markets Index.

Additionally, it was pointed out that Direct Listing procedure developed by SECP and PSX can be used to achieve this without any significant sale of shares by GoP.

The participants in the meeting further emphasized that all measures/ schemes introduced by GoP, MoF, FBR and SBP should be available on better terms for listed companies such as concessional financing schemes for SMEs, that GoP use the capital markets for further Sukuk and debt issues for itself and other GoP controlled entities, that the term ‘Advances’ for the purpose of calculating ADR under the Income Tax Ordinance, 2001 must include investment in all kinds of Corporate Sukuks/ TFCs, that investment limit for small retail investors, with easier AML requirements in Sahulat Accounts be increased to Rs.2.5 million with SECP fully clarifying AML requirements for Sahulat Accounts, that reforms in NSS are extremely important to eliminate distortions in the financial sector and to create significant savings for the GoP.

The Finance Minsiter was highly receptive to all the points discussed. In particular, he asked the FBR to immediately review any discrepancies in the CGT regime and the issue of tax credit for newly listed companies. He asked SECP to review the investment limit and AML requirements for Sahulat Accounts. He also directed the MoF to review listing of DFIs, procedure for issuance of debt/ Sukuks in the capital markets and interest rate setting of NSS instruments.

Infact, for a thorough review of all the above matters, the Finance Minister set up three committees. The first committee was set up to share the perspective of the private sector with SBP and the MPC on interest rates, the second one was set up to coordinate with PBC and PSX on all the tax issues and the third committee was set up to coordinate the review of listing of DFIs, debt & Sukuk issuance, reform of NSS and explore development of a market for exchange rate forward dealing which all market participants can access. In the first committee, the Deputy Governor SBP, Dr. Inayat Hussain will coordinate with representatives of PSX and PBC. In the second committee, Member Tax Policy, Mr. Afaque Qureshi will coordinate with PBC and PSX on all tax issues whereas in the third committee, Special Secretary Finance, Mr. Awais Manzoor will coordinate along with Mr. Nasim Beg from the private sector.