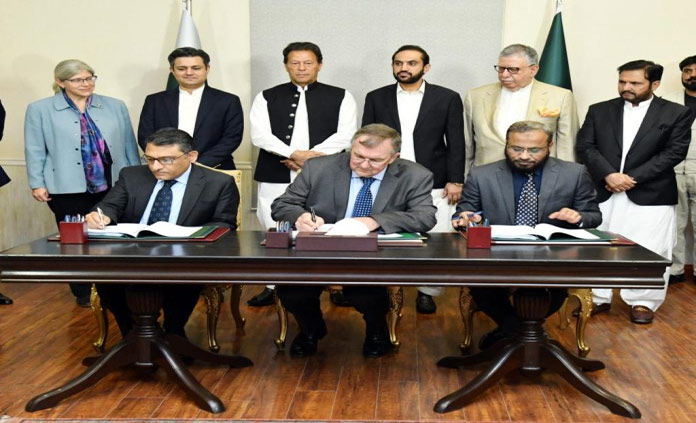 ISLAMABAD (APP) - Prime Minister Imran Khan Sunday witnessed the signing ceremony between the Government of Pakistan, the Government of Balochistan and Barrick Gold Corporation of Canada after successfully resolving the longstanding dispute with Tethyan Copper Company (TCC) concerning the development of copper and gold mines in Chagai, popularly known as the Reko Diq dispute.

The new agreement was signed by representatives of the Federal and Balochistan Governments with a delegation of Barrick Gold, led by Chief Executive Dr. Mark Bristow.

As per the terms of the new agreement, the Reko Diq project shall be revived and developed by Barrick gold in partnership with Pakistani entities. The new project company shall be owned 50% by Barrick Gold. The remaining 50% shareholding shall be owned by Pakistan, divided equally between Federal Government and the provincial government of Balochistan.

The investment shall create over 8000 new jobs. This project shall make Balochistan the largest recipient of foreign direct investment in Pakistan and the Reko Diq project shall be one of the largest copper and gold mining projects in the world. To ensure optimal utilization of nation’s mineral wealth the government was also considering setting up a smelter.

The agreement was reached after several rounds of negotiations over the last three years. In August 2019, the Prime Minister had set up a committee to steer the negotiations with an aim for early development of the mines. In this effort, the Federal and Provincial Governments were assisted by international advisors.

To ensure the deal was compliant with all the laws, the Government shall submit the matter before the parliament and the Supreme Court.

While speaking on the occasion, the Prime Minister stressed on the emphasis his government placed on development of Balochistan and uplift of underdeveloped areas. He expressed hope that the investment will mark the beginning of large scale investments in Balochistan that shall change the quality of lives of ordinary citizens in Balochistan.

The Prime Minister appreciated the efforts of the negotiating team for a transparent and favourable agreement for the people of Balochistan.

Prime Minister Imran Khan congratulated the nation and residents of Balochistan province over the successful agreement for the development of Reko Diq mine.

In a series of tweets, the prime minister expressed hope that Reko Diq mine would be potentially the largest gold and copper mine in the world and liberate the country from the crippling debt, ushering in a new era of development.

Minister for Finance and Revenue Shaukat Tarin Sunday said Governments of Pakistan and Balochistan, Antofagasta plc, and Barrick Gold Corporation have reached agreement in principle on a framework to reconstitute the Reko Diq project, and a pathway for Antofagasta to exit the project.

Addressing a hurriedly called press conference along with the Energy Minister Hammad Azhar and Chief Minister Balochistan Mir Abdul Quddus Bizenjo here, the minister said after the new development, Pakistan would not only avoid the $11 billion penalty but also get an opportunity of exploring the world’s largest gold and copper reserve.

He said some $10 billion would be invested under this project which would create 8000 new jobs for locals.
The minister said as per the new agreement, Barric Gold would retain 50% share, while government of Balochistan would get 25% share, and the rest 25% share would be attributed to the State Owned Enterprises Oil and Gas Development Company (OGDCL), Pakistan Petroleum Limited (PPL), and Government Holdings Pakistan (GHPL).

Mr. Tarin said an agreement was signed in 2006 among a Canadian Company Barrick Gold, a Chilean company Antofagasta plc, and governments of Pakistan and Balochistan to extract gold and copper from the Reko Diq minses reserve.
As per the old agreement, 37.5 percent share each was given to the two foreign companies and 25 percent share was to given to Goverment of Blochistan.

The agreement was suspended in 2011 due to a dispute over the legality of its licensing process. As a result the International Court of Arbitration leveled $6.4 billion award on government of Pakistan while on the same time the London Court of Arbitration was also imposing another $4 billion fine on Pakistan.

He said soon after taking over the charge, Prime Minister Imran Khan aggressively pursued the case and directed to draw a suitable solution as early as possible.

As a result an agreement was settled today under which Antofagasta decided not to participate in the reconstituted project and withdrew from its claim of $3.9 billion in place of $900 million.

He informed that the $900 million would be paid by the three SOEs and in return they would get the 25% share of the project.
Had the PM not taken his personal interest in the case, Pakistan would have to pay the huge amount of $11 billion as a penalty, he added.

Shaukat Tarin said Pakistan and Balochstan would be benefited for over 100 years from this project and the total worth is estimated to be over $100 billion.

Terming the new agreement as a land mark achievement for Pakitan, Hammad Azhar said it was a historic day as it had not only avoided $11 billion worth of penalty but also created a new opportunity for Pakistan.

He said this was not for first time the PTI government had achieved the landmark success, but it had also avoided the country from moving to FATF black list by implementing 32 out of 35 conditions. The government also saved billions of dollars by renegotiating the costly IPP agreements.

The minister informed that according to the Barrick Gold, Reko Diq was the only one part with such huge gold and copper reserves. There were also other reserves in the area.

So a lucrative mining cluster is going to be developed in Pakistan, he added.