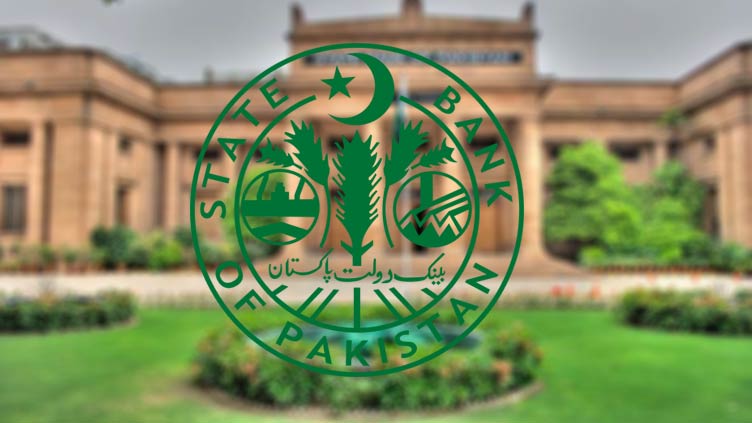 KARACHI (Dunya News) – The State Bank of Pakistan (SBP) announced its bi-monthly monetary policy on Tuesday and decided to maintain its policy rate at 9.75 percent.

This decision reflected the MPC’s view that the outlook for inflation has improved following the cuts in fuel prices and electricity tariffs announced last week as part of the government’s relief package. At the same time, high-frequency indicators suggest that growth continues to moderate to a more sustainable pace.

This moderation should help keep at bay demand-side pressures on inflation and contain non-oil imports, notwithstanding the significant uncertainty about the future path of global energy and food prices due to the Russia-Ukraine conflict.

Since the last MPC meeting on January 24, 2022, headline inflation moderated in February to 12.2 percent (y/y). Inflation in February would have been noticeably lower were it not for abnormal increases in a few perishable items. Accordingly, core inflation also fell in urban areas and inflation expectations have remained stable, suggesting that second-round effects from higher commodity prices remain contained.

On the external front, despite the rise in global prices, the February trade deficit witnessed a further 10 percent contraction month-on-month basis on top of the 29 percent decline recorded in January, confirming the slowdown in domestic demand. While the current account deficit rose in January, this largely reflected lumpy imports of oil, vaccines and other items financed through loans and supplier credit.

Excluding these imports, the deficit would have been about $1 billion lower, suggesting that the underlying trend in the current account balance is also moderating.

Looking ahead, the MPC noted that while current real interest rates on a forward-looking basis are appropriate to guide inflation to the medium-term range of 5-7 percent, support growth, and maintain external stability, the Russia-Ukraine conflict has introduced a high degree of uncertainty in the outlook for international commodity prices and global financial conditions.

Continued adverse conditions on these fronts could pose challenges to the outlook for the current account deficit and inflation expectations, which could necessitate changes in the policy rate. Since the Russia-Ukraine situation remains fluid, the MPC noted that it was prepared to meet earlier than the next scheduled MPC meeting in late April, if necessary, to take any needed timely and calibrated action to safeguard external and price stability.

In reaching its decision, the MPC considered key trends and prospects in the real, external and fiscal sectors, and the resulting outlook for monetary conditions and inflation.

Real Sector: Growth continues to moderate on the back of high prices and demand-easing measures. Since the last meeting, automobile sales and electricity generation have declined month-on-month. Sales of petroleum products and cement have also decelerated since last October.

In the second quarter of the current fiscal year, growth in fast-moving consumer good (FMCG) sales dipped and general sales tax collections from services were lower than last year. On the supply side, LSM growth has been revised upward following the rebasing, settling at around 5-6 percent year-on-year since October.

Agricultural prospects have somewhat weakened, with key inputs such as fertilizer off-take and water availability during the Rabi season lower than last year. Cotton and wheat production will likely be less than previous estimates. Growth in FY22 is still expected around the middle of the previously forecast range of 4-5 percent.

External Sector: In January, there was a sharp and broad-based decline in imports, including energy imports, to $6.1 billion from $7.6 billion in December based on PBS data. Imports declined further in February while exports rose, resulting in a 38 percent contraction in the trade deficit compared to its peak last November.

Around three-fourths of the rise in imports this year is estimated to stem from higher prices, with the contribution from volume growth negative in January.

These trends suggest that demand-led pressures on the current account are declining. While the current account deficit rose to $2.6 billion, this included a sizeable contribution from imports financed through loans and supplier credit, including oil and vaccines. Since these imports are concurrently financed with offsetting inflows in the capital and financial account, they do not undermine sustainability of the current account.

Remittances fell marginally in January, partly reflecting seasonality, but have grown in line with expectations so far this fiscal year. Looking ahead, the non-oil current account deficit is expected to decline, as import growth continues to slow with moderating demand, while exports and remittances remain resilient. The outlook for the overall current account deficit is dependent on the path of international oil prices.

Finance Sector: At around 2 percent of GDP, the fiscal deficit during the first half of FY22 was almost the same as last year. Federal Board of Revenue tax collections grew strongly by 30 percent year-on-year during the period of July-Feb. of the current financial year, in part due to a depreciated exchange rate and higher imports than last year as well as strengthened tax collection efforts.

This offsets declines in non-tax revenues due to lower petroleum development levy revenues and increased spending, including on subsidies, grants and provincial PSDP. While the primary balance posted a surplus of 0.1 percent of GDP in the first half of the fiscal year 2021-22, it was lower than the surplus of 0.6 percent of gross domestic product in the same period last year.

Under the assumption that the recently announced relief package will not add to the fiscal deficit due to other offsetting savings, inflation should be lower through the rest of the fiscal year than earlier estimated.

On the other hand, demand for loans for fixed investment and housing and construction continued to grow. Monetary conditions remain tighter in real terms, with private sector credit growth in negative territory.

Headline inflation fell from 13 percent (y/y) in January to 12.2 percent in February, driven by a slowdown in energy price inflation. The contribution to inflation from food prices rose, reflecting higher prices for tomatoes, fresh vegetables, chicken, and vegetable ghee. Meanwhile, core inflation ticked down in urban areas and up in rural areas, while inflation expectations of both consumers and businesses remained broadly unchanged.

The MPC continues to expect inflation to average between 9-11 percent this fiscal year before declining toward the medium-term target range of 5-7 percent in FY23 as global commodity prices normalize.

This baseline outlook is subject to risks from the path of global prices, domestic wage developments, and the fiscal policy stance. The MPC will continue to carefully monitor developments affecting medium-term prospects for inflation, financial stability and growth.