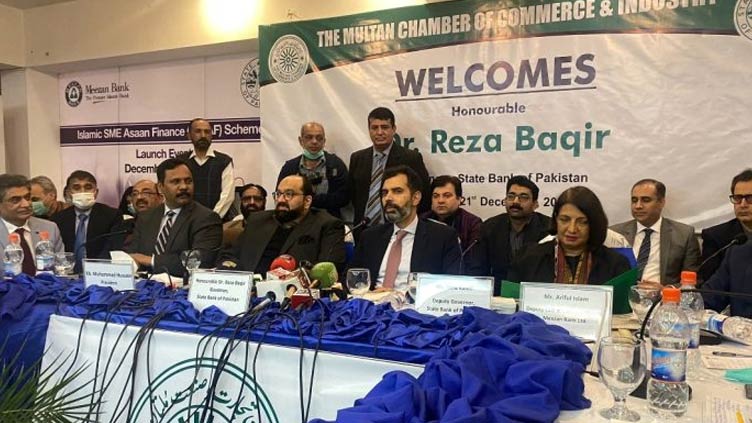 MULTAN (Dunya News) – State Bank of Pakistan (SBP) Governor Dr Reza Baqir has said that Asaan Finance Scheme (I-SAAF) will be a game changer in enhancing access to finance to SMEs as it addresses the long outstanding challenge of lack of collateral faced by them.

Speaking at Islamic SME Asaan Financing (I-SAAF) Scheme at Multan Chamber of Commerce & Industry (MCCI) here, Dr Reza Baqir spoke at length about significance of SMEs in Pakistan against what they are getting in terms of access to finance, some of the initiatives SBP took to promote SME finance and potential role of SAAF in near future.

Governor Dr Baqir highlighted that with the objective of stimulating sustainable economic growth of country, State Bank has been taking various initiatives to facilitate the business community.

Some of the major initiatives include introduction of a unique collateral free loan scheme for SMEs; Asaan Finance (SAAF), SBP’s concessionary refinance schemes for different sectors, measures taken to combat the COVID-19 effects, digitization of banking systems and persuasion of banks

He sought Chamber of Commerce and Industry cooperation to identify lists of employees of its member industries for extending them loans for constructing homes under Mera Pakistan, Mera Ghar Housing Scheme.

Governor stated that salaried class of the industry drawing around Rs40,000 could avail facility of the loan for building homes.

He regretted that only a few Pakistanis could realize the dream of housing in the past, adding that the government launched the scheme with 5-7 percent markup for easiness of people who want to erect homes on 5 to 10 marlas of land under Mera Pakistan, Mera Ghar scheme.

“Banks sanctioned Rs100 billion for this loan. Masses have availed Rs30 bln under this scheme so far while applications of Rs 250 bln are pending with them till now..” he explained.

Extolling MCCI services for running SBP scheme for building of new hospitals or extending old ones during COVID-19, Reza informed that it had set an unprecedented example for rest of the chambers of the country and added that Rs1 billion was disbursed in Multan for it with only 3 percent interest and Meezan Bank offered loan at zero percent markup too under this scheme for which it deserves appreciation.

“We chose to make the first disbursement of the I-SAAF scheme at MCCI because of its great help in this connection in the past too,” he noted.

Neither the SBP extends loans itself nor it deals with customers; rather it involves banks for it, governor said and added that the central bank runs its schemes in collaborations with different chambers of commerce.

“We get first-hand knowledge by the chamber’s cooperation on these schemes. The MCCI helped us a lot for running the schemes successfully.” Reza maintained.

He stated that the government extended great help for the loaning scheme adding that the risk of the banks from 40-60 percent will be protected by the government.

Governor at the end, assured the continued support and facilitation of the central bank for the business community and also advocated them to continue playing their effective role in overall economic growth of the country.

He urged upon SBP to conduct regular awareness seminars for SME about different schemes for them and women entrepreneurs adding that an SME mela should also be arranged about Kamyaab Jawan Programme at MCCI.

Borrowers should also be given access to ECIP for rectification of an incorrected report against them and added that documents procedure should be made easy for people who intend to open accounts with banks for starting new business.

Later replying to journalists’ questions, the governor informed that SBP conducts ” mysterious shopping ” in three areas including information material, dealing with the banker and proper information to know the problems faced by the customer for borrowing from banks adding these are conveyed to the presidents of the banks to improve the services.

He said that building a house was dream but now it was being fulfilled with this scheme especially for commoners.