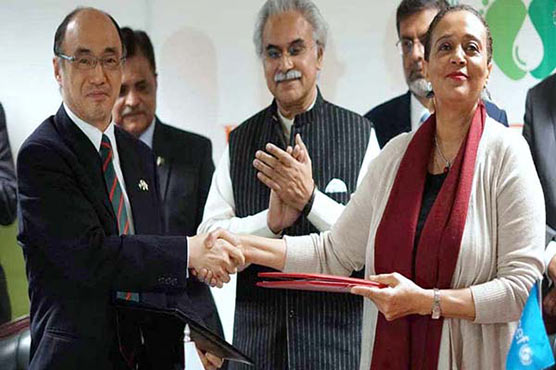 This grant worth USD 4.5 million will be used for procurement of oral polio vaccine.

(APP) – The Government of Japan provided USD 4.5 million grant as aid to support the supply of the essential oral polio vaccine.

This vaccine will enable the programme to reach more than 20 million children under the age of five in Pakistan during vaccination drives planned from December 2019 to November 2020, said a press release issued by economic affairs section of embassy of Japan in Islamabad on Wednesday.

The notes of the grant were signed and exchanged between the Government of Japan, Japan International Cooperation Agency (JICA) and the United Nations Children’s Fund (UNICEF) in the presence of Special Assistant to the Prime Minister for National Health Services, Regulations and Coordination, Dr Zafar Mirza, including officials and dignitaries.

This grant worth US$ 4.5 million will be used for procurement of oral polio vaccine.

A total of 22.69 million doses will be procured under this grant which will support in vaccination of an estimated 20 million children for case/event response or mop-up activities.

This will enable the programme to continue its efforts for closing immunity gaps among children under five years old. “Pakistan is currently facing a challenging situation in polio eradication."

However, the Government is committed to making all-out efforts to ensure all children receive the essential vaccine.

It is a top most priority of the Government of Pakistan to make Pakistan polio-free,” said Dr. Zafar Mirza during the signing ceremony.

“Continuous Support from the Government of Japan and partners will help us to maintain high-quality campaigns and reach every child in Pakistan with this essential polio vaccine,” he continued while expressing his gratitude to Japanese government and other partners.

For that purpose, we expect the Government of Pakistan to take further initiative and redouble its effort to eradicate polio including educating the people in need how dangerous polio virus will be” said Yusuke Shindo, Chargé d’ Affaires ad interim of Japan to the Islamic Republic of Pakistan.

“UNICEF is thankful to the people and the Government of Japan for their generous contributions to the Pakistan Polio Eradication Programme.

The new grant comes at a time when the country is facing challenges to stopping polio virus circulation.

“I am confident that with the sustained commitment from the Government of Pakistan and strong support from all partners, together we will be able to reach our goal, polio-free Pakistan.

“Now we are approaching the most difficult time where all stakeholders are putting in their best efforts.

We are proud that JICA can contribute to admirable efforts to protect Pakistani children from polio through this vaccine procurement,” said Shigeki Furuta, Chief Representative, JICA in Pakistan.

“JICA expects that the vaccine, the only way to strengthen children’s immunity, will be used effectively with the understanding of parents and communities, and the efforts of frontline workers,” he further added while speaking at the occasion Pakistan has made considerable progress in reducing poliovirus transmission in recent years.

However, in 2019 the programme has seen a significant spread of the virus as the number of children missed during house-to-house campaigns resulted in an upsurge of polio cases in the country.

As of Dec. 8, 94 polio cases across all provinces were reported, of which 68 were recorded from Khyber Pakhtunkhwa province.

The Polio Eradication programme plans to deliver basic core strategies for polio eradication in 2020, including ensuring high-quality Supplementary Immunization Activities (SIA) that are able to interrupt transmission of the virus.

There will be three NIDs and three SNIDs in 2020.

The purpose of multiple vaccinations is to protect each individual child and to contribute to the protection of every child within the community by building and maintaining high population immunity to stop transmission of the wild polio virus.

The Government of Japan has been supporting the Polio Eradication programme in Pakistan since 1996.

The grant and loan contribution from the Government of Japan has amounted to more than US$ 221.87 million (24,128 million Japanese Yen approx.)