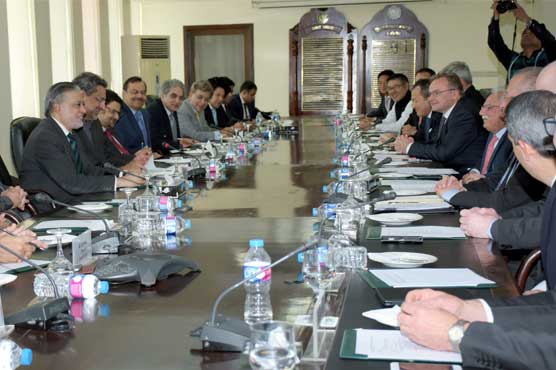 The consortium comprises of leading multinational energy companies including Qatar Petroleum, ExxonMobil, Total, Mitsubishi Corp, and Hoegh LNG. Federal Minister for Water & Power, Khawaja Muhammad Asif, Federal Minister for Petroleum and Natural Resources, Mr. Shahid Khaqan Abbasi, and Chairman Board of Investment (BOI), Dr. Miftah Ismail, were present in the meeting. Chairman and CEO of Global Energy Infrastructure Limited (GEIL), with which the consortium is partnering on the project, also participated in the meeting.

Minister for Petroleum and Natural Resources said that this project is completely a private-to-private venture, with no government financing or off-take guarantee, which makes the project the first of its kind in Pakistan. He further stated that the LNG Supply Agreements relating to project have also been executed without the involvement of the Government of Pakistan.

He said that the Ministry of Petroleum & Natural Resources will extend all requisite policy and regulatory support for the project. Minister for Water & Power said that this project augurs well for the gas supply needs of the power sector. Chairman BOI, who is also Chairman of Sui Southern Gas Company (SSGC), said that BOI and SSGC will extend full cooperation to the consortium for the successful implementation of the project.

On the occasion, the Finance Minister said that the Government of Pakistan welcomes and appreciates the efforts of the consortium to develop this project. He said that the participation of leading multinational energy companies in this project is yet another demonstration of the international investors’ confidence in Pakistan’s economic turnaround and the investor-friendly policies of the present government.

He said that Pakistan has achieved macroeconomic stability within three years, contrary to predictions from various quarters that Pakistan would default on its obligations by 2014 and would need six years to attain macroeconomic stability. He said that foreign exchange reserves recently reached an all-time high providing five months of import cover, and that GDP growth was 4.7% in FY 2016, an eight year high.

The Finance Minister said that the government is actively working on projects to add over 10,000 MW of electricity to the system in the short term, and a further 15,000 MW beyond 2018. He highlighted that the government is now focused on achieving higher, sustainable and inclusive economic growth, and is targeting GDP growth of over 5% in the current fiscal year.

Senior executives representing the consortium acknowledged the government’s achievements in stabilising the economy and putting it on the path to growth. They reaffirmed the fact that the project entails zero burdens on the government. They appreciated the government’s investor friendly policies which have enabled this project to materialize. They said that it would have been very difficult to envisage a project of this nature in Pakistan a few years ago.

Under the project, the LNG Terminal will have a capacity of 1,000 mmfcd per day, and it will re-gasify up to 750 mmfcd gas per day as base-load. The project is expected to be completed in 2018. The project, after completion, will account for around 10% of the primary energy supplies of the country, and will be equivalent of 20% of the current domestic natural gas production.

The meeting was also attended by senior officials of the Ministry of Finance, Ministry of Water & Power and Ministry of Petroleum & Natural Resources.