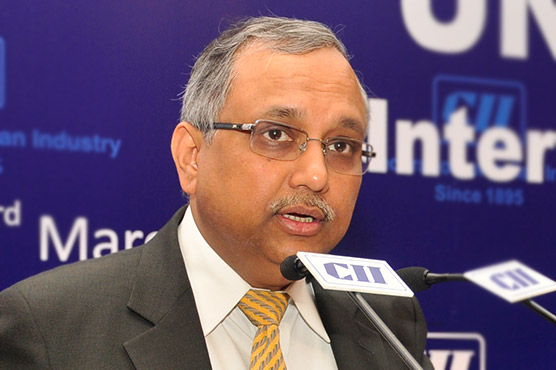 MUMBAI (AFP) - India s central bank Tuesday announced a surprise quarter-point rise in its key interest rate, signalling that taming inflation is the priority rather than spurring growth months before an election.

After a meeting in the financial hub Mumbai, the Reserve Bank of India (RBI) lifted the benchmark repo rate, at which it lends to commercial banks, to 8.0 percent. The cash reserve ratio, the amount banks must keep in hand to withstand financial shocks, was left unchanged at 4.0 percent.

The currency rose on the news, firming by about half a rupee to 62.66 rupees to the dollar from Monday s more than two-month low.

The unit has come under renewed pressure amid investor fears about the impact of a rollback in the US Federal Reserve s easy money policy on India and other emerging markets.

"The decision was a close one this time around," RBI Governor Raghuram Rajan, who has steered a hawkish course since he took over last year, told reporters.

"But we chose to act," he said, adding, "some aspects of inflation continued to be sticky despite a fall in vegetable prices that suggested to us some more medicine was required."

The rate hike was unexpected, with most economists forecasting borrowing costs would remain on hold, especially after a fall in the widely watched Wholesale Price Index last month to 6.16 percent year-on-year in December from 7.52 percent in November.

Tuesday s announcement disappointed business leaders, who have been clamouring for a rate cut to spur an economy which has been growing at a decade low.

Chandrajit Banerjee, director general of the Confederation of Indian Industry, said he was "surprised" by the decision.

"This is an opportune time to accord a precedence to growth over inflation," he said.

But Rajan said there were still upward pressures on inflation from factors such as rising services prices, which needed addressing "resolutely" even while "recognising the economy is weak and substantial fiscal tightening is likely" in the January-March quarter.

Madan Sabnavis, chief economist, Care Ratings, said: "Usually the RBI talks about growth and inflation. But this time it was just inflation and inflation.

"The signal is, corporates should not expect growth to be driven by interest rate adjustments."

The RBI raised rates in both September and October to fight inflation, but then surprised markets by holding them steady in December even after inflation accelerated to a 14-month peak.

According to a macroeconomic report on Tuesday the central bank expects headline consumer price index inflation to remain above nine percent for the rest of this financial year to the end of March.

"Today s decision suggests the RBI is not going to be overly focused on the growth angle unless of course (growth) collapses," said Ashutosh Datar, economist at India Infoline brokerage.

India must by hold by May a general election in which the scandal-tainted Congress-led government of Prime Minister Manmohan Singh is expected to fare poorly.

Singh, a renowned economist, is desperate to see signs of an upturn in the economy, which some analysts forecast will grow below five percent in the year to March -- a far cry from near-double digit levels just a few years ago.

The RBI said it expects growth of five to six percent in the financial year 2014-15. Its next policy review will be on April 1.