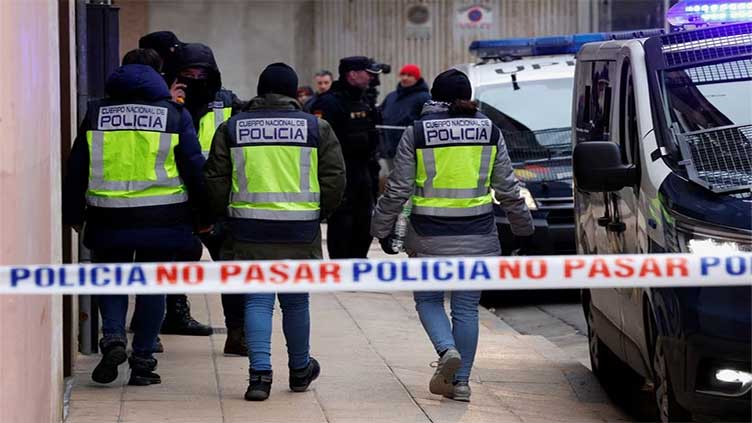 MIRANDA DEL EBRO, Spain (Reuters) - Spanish police on Wednesday arrested a 74-year-old man suspected of sending parcel-bombs in November and December to targets including the Ukrainian and U.S. embassies and the prime minister s office, the Interior Ministry said.

The man was detained in the northern town of Miranda de Ebro, and police searched his home.

The suspect is a retired Spanish citizen with the initials P.G.P. who is tech-savvy and very active on social networks, the ministry said.

"Although it is presumed that the detainee made and sent the explosive devices by himself, police do not rule out the participation or influence of other persons in the events," it added in a statement.

Interior Minister Fernando Grande-Marlaska declined to comment on reports that a Russian group could be behind the attacks.

"We are working on all possibilities," Grande-Marlaska told reporters from Vitoria. "The investigation is very advanced and we can really be very satisfied."

A video provided by the Interior Ministry showed officers and a sniffer dog searching a silver Peugeot car parked outside as forensic specialists took photographs. Police also appeared to gain access to a lock-up garage.

Witnesses said the suspect remained inside the house as the searches were conducted.

The man used to work for the town hall of the Basque capital Vitoria-Gasteiz before retiring in 2013, a city spokesperson said. Miranda de Ebro is 35 km (22 miles) southeast of Vitoria.

A total of six parcels with explosives were sent between Nov. 24 and Dec. 2. In addition to the two embassies and Prime Minister Pedro Sanchez s office, they were addressed to the Defence
Ministry, an air force base and a weapons manufacturer.

Most were defused, although an employee at the Ukrainian embassy was slightly injured when one ignited.

Investigators have concluded that all six parcels were sent from the city of Burgos, the ministry said.

A source close to the inquiry had told Reuters in early December that all the parcels had been mailed from Valladolid, a two-hour drive from Miranda del Ebro.

The New York Times reported on Sunday that investigators had focused on the Russian Imperial Movement, a group with ties to Spanish far-right organisations that was believed to be linked to Russian intelligence.

Spanish officials have declined to comment on the report, while a senior judicial source denied having knowledge of such a line of investigation.