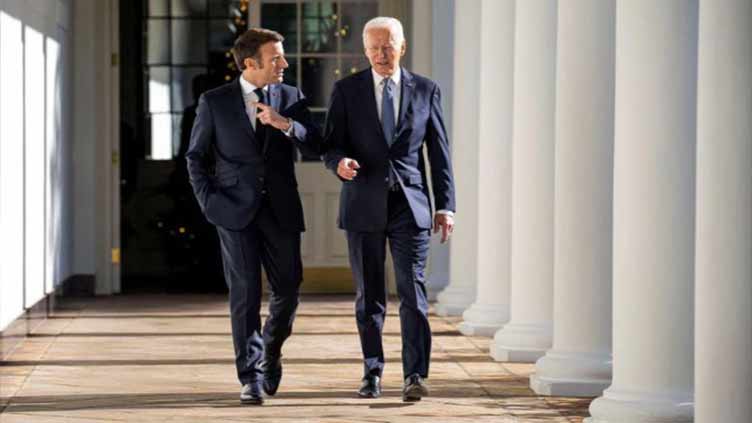 WASHINGTON (Reuters) - Joe Biden on Thursday used the first state visit of his presidency to demonstrate unity with France s Emmanuel Macron on Ukraine, show willingness to speak to Russia s Vladimir Putin and assuage European anger over US subsidies.

The US president and first lady Jill Biden held a sumptuous, star-studded White House state dinner, featuring music from Jon Batiste and Chardonnay from the Napa Valley, in honor of President Macron and his wife, Brigitte.

But Ukraine, the biggest attack on a European state since 1945, remained the most pressing issue for the leaders, who vowed to continue robust support and to back Kyiv during the tough winter months.

Biden has so far resisted talking to Putin since the invasion was launched in February, while Macron has kept lines of communication open. Russia calls the war a "special operation."

"Let me choose my words very carefully," Biden told a news conference with Macron. "I m prepared to speak with Mr. Putin if in fact there is an interest in him deciding he s looking for a way to end the war. He hasn t done that yet."

Macron, for his part, said he would continue to talk to Putin to "try to prevent escalation and to get some very concrete results" such as the safety of nuclear plants.

Biden pledged to Macron to make changes to US legislation passed by the U.S. Congress this year that European nations fear will harm their economies.

Bills aimed at boosting US renewable energy and the semiconductor industry have "glitches" that can be addressed, Biden said.

At a meeting on Wednesday with US lawmakers, Macron said the act was "super aggressive" toward European companies, one participant told Reuters on condition of anonymity.

"France did not come here to ask for some kind of exception for its economy. We came to share how the consequences of this regulation impact us," he said on Thursday.

European leaders say the legislative package signed by Biden in August is unfair to non-American companies and would be a serious blow to their economies as Europe deals with the fallout from Russia s February invasion of Ukraine.

"There are tweaks that we can make that can fundamentally make it easier for European countries to participate and or be on their own," said Biden, adding he and Macron had a long discussion about the topic.

Macron said it was important for the United States and its European allies to "re-synchronize" their approaches.
The leaders made "major progress" on how to alleviate the impact, and Biden could use executive orders to give

On Ukraine, the two leaders said in a joint statement they were committed to holding Russia to account "for widely documented atrocities and war crimes, committed both by its regular armed forces and by its proxies." Russia denies committing war crimes.

They also vowed to coordinate on their concerns regarding "China s challenge to the rules-based international order, including respect for human rights and to work together with China on important global issues like climate change."

Macron arrived in Washington on Tuesday for his second state visit to the United States since the French leader took office in 2017.

Biden, 80, and Macron, 44, have had many meetings at international gatherings but this was the longest time they have spent together.

A glittering state dinner was planned on Thursday evening, with 200 Maine lobsters flown in for the occasion.
Guests attending the formal event in a pavilion on the White House South Lawn included French fashion designer Christian Louboutin, whose shoes featured on TV show "Sex and the City," U.S. actress Julia Louis-Dreyfus, from the political satire comedy "Veep" and "Seinfeld," and singer and "The Voice" coach John Legend. read more

Macron added that the two countries come from "the same values" of "we, the people."

The two leaders and their wives, who dined together informally at a restaurant on Wednesday, earlier took part in a South Lawn arrival ceremony that featured a military honor guard, a red-jacketed colonial band with the Fife and Drum Corps and national anthems.

Among the gifts Macron brought was a vinyl and CD version of the original soundtrack of Claude Lelouch s 1966 film "Un Homme et une Femme," the film the Bidens went to see on their first date, according to the Elysee Palace.

The Bidens presented Macron with a custom mirror made of fallen wood from the White House grounds and a custom vinyl record collection of great American musicians.

On Friday, Macron is expected to visit New Orleans, which was once controlled by the French and still maintains French cultural links, where he will meet the Louisiana governor and a memorandum of understanding on climate change will be signed.