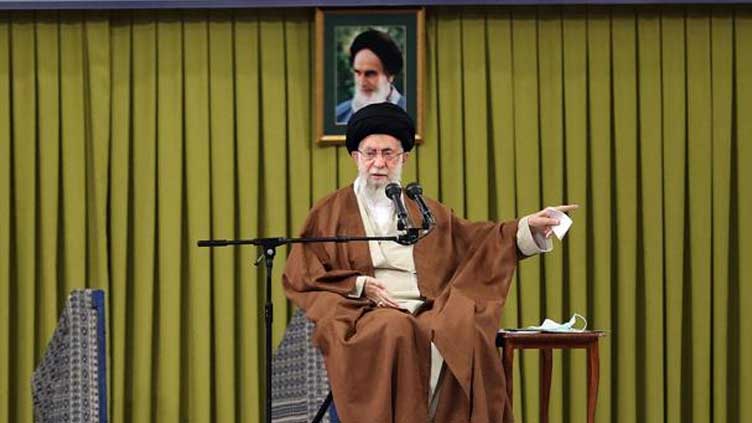 BAGHDAD (AP) — Iran’s supreme leader praised paramilitary volunteers tasked with quashing dissent on Saturday in a televised address as dozens of eye doctors warned that a rising number of demonstrators have been blinded by security forces during anti-government protests.

Ayatollah Ali Khamenei addressed members of the Basij, the volunteer paramilitary wing of the elite Revolutionary Guard, and reiterated unsupported claims that protesters demonstrating countrywide are “tools” of the U.S. and its “mercenaries.”

“(The) Basij should not forget that the main clash is with global hegemony,” Khamenei said, referring to the U.S. The address marking Basij week in Iran echoed previous statements lambasting the protests as a foreign plot to destabilize Iran.

The Basij have taken a leading role in clamping down on demonstrations that began Sept. 17, ignited by the death of a young woman while in the custody of Iran’s morality police. Her death sparked months of protests over the country’s mandatory headscarf but quickly morphed into one of the greatest challenges to Iran’s theocracy since the chaotic years after the 1979 Islamic Revolution.

Protests continued Saturday at some universities in the capital Tehran and other cities, according to social media. Because of a severe country-wide crackdown by Iranian security forces, demonstrations have become more scattered. Protesters have also called for commercial strikes.

Khamenei’s comments came a day after Iranian President Ebrahim Raisi met with a group of Basij members and praised their efforts to maintain security, according to the semi-official Tasnim news agency.

Iran’s ferocious crackdown on dissent has drawn criticism, with at least 448 people killed and more than 18,000 arrested in the protests and the violent security force response that followed, according to Human Rights Activists in Iran, a group monitoring the demonstrations. Iran has not offered a death toll or a number of those arrested.

In a letter, 140 ophthalmologists raised concerns about a rising number of patients with severe eye injuries resulting from being shot with metal pellets and rubber bullets, according to pro-reform Iranian news site Sobhema and Iran International as well as other sites on social media. “Unfortunately in many cases the hit caused the loss of sight in one or both eyes,” the letter, addressed to the head of the country’s ophthalmologists association, said.

The doctors requested that the head of Iran’s Opthalmology Association pass on their concerns about the irreparable damage caused by security forces to the relevant authorities.

It was the second letter from eye doctors expressing concerns about police brutality and the shooting of pellets and rubber bullets into the eyes of demonstrators and others. A previous letter was signed by over 200 ophthalmologists.

Last week, videos circulated on social media of law student Ghazal Ranjkesh in the southern city of Banda Abbas who lost an eye after being shot with a metal pellet on her way home from work.